A Month Of Cookbooks - Day Twelve 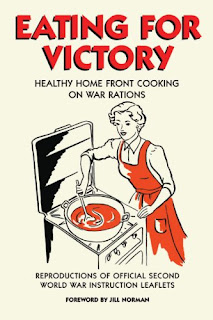 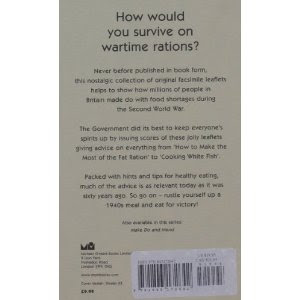 We've always been a fan of historical re-enactment books and TV series, and we particularly enjoyed the one dealing with life in the Second World War years. When I saw that the the official dietary and recipe information leaflets disseminated by British Government agencies during the War had been republished in a facsimile book form, I simply had to have a copy !
If you want a peak inside, search for the book on amazon.co.uk and you can look inside......

Even the new book looks old; the pages are printed on cream tinted paper with the original typefaces preserved as well as the original illustrations.  It looks dated, but the recipes are simple, nourishing, easy to prepare and designed to avoid any waste of food at at time when rations were rigidly enforced and supplies were meagre.  Many of the recipes are calorie-dense, which was necessary indeed for those who were performing many hours of hard manual labour per day, yet it would certainly be possible to tweak them to make them more appropriate for our very much more sedentary lifestyle now, and the portion sizes simply serve to illustrate that it is all too easy to overeat nowadays when there is no real need to do so. It is interesting that the British populace were in better physical health and fitness during the austerity of rationing than they are now in a time of comparative plenty.

Dried egg was a staple then, and it is still  widely available in supermarkets now, but I have never been tempted to buy any to try out the recipes, preferring to use fresh eggs instead. There is a fascinating chapter of recipes for cakes, biscuits and scones without using eggs at all  :-)   Preserving fruits and vegetables by bottling is covered in detail, and most families would have turned over their lawns to  growing foodstuffs or keeping livestock, particularly hens and rabbits.

My husband and I would be quite happy living a WWII diet, as much of it is what would nowadays be termed  hearty food, despite the rationing. The two youngest daughters have both found this book incredibly useful when studying the Second World War in school and the book has been "borrowed" by the staff teaching the topic for reference on several occasions.

Posted by Elizabeth @ The Garden Window at 1:18 pm

Email ThisBlogThis!Share to TwitterShare to FacebookShare to Pinterest
Labels: A Month Of Cookbooks