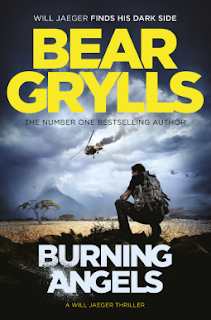 
This is the second book to feature Will Jaeger, and the tension so evident in the first book is kept to an even greater intensity in this sequel.

The first few chapters deal with the gruesome discovery of an ancient  ice-entombed female corpse  - displaying all the signs of a haemorrhagic disease - by Nazi troops. I have to admit, this part did turn my stomach, but the story soon moves into modern but no less frightening times.

Will is still desperately searching for his kidnapped wife and son, captured by unknown enemies for unknown reasons, and the regular photos he is sent of them in captivity are having their emotional toll on him. After completing a mission in Cuba,  a few clues emerge which suggest that Africa may hold the answers he is seeking and Will is persuaded by his colleague Narov to join the mysterious 'outfit' which employs her.

Will finds that family ties with the last war are deep and more complex than he had ever realised, and that he is faced with an enemy who will stop at nothing - not even biological terrorism - to achieve his goals, leaving Will Jaeger's wife and son in terrible danger....

This was a fast-paced, action-packed book which I found to be really enjoyable on the whole, though the ending seemed rather rushed and the science a little superficial. I find it very hard to believe that people who had endured torture and captivity would have slipped effortlessly and seamlessly back into everyday and family life as depicted here, but other than that, it was a cleverly plotted book.

Posted by Elizabeth @ The Garden Window at 1:13 pm No comments: