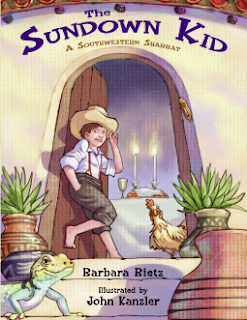 When a Jewish family emigrated to the West, they knew some things would be very different. They kept their traditional Jewish customs - the mezzuzah on the front door and the Shabbat meal, but they missed their family and friends from back home.  “Too much soup,” Mama said. “Not enough family.”

As they settle in, the young boy makes friends in their small town and invites them to share their Shabbat hospitality, finally making Mama happy at having a full table to rejoice in the blessings they have received.

This is a gorgeous little book for children, beautifully illustrated, explaining the concepts of hospitality and sharing the blessings of Shabbat in a simple and fun way.
Reading it was a delight :-)

Posted by Elizabeth @ The Garden Window at 1:38 pm No comments: 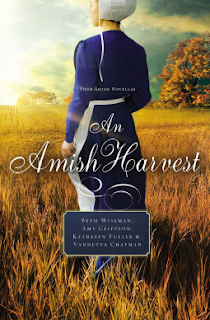 Another installment in a perenially popular Amish novella collection of books, this one dealing with stories relating to harvest-time.

Under the Harvest Moon by Beth Wiseman deals with some difficult themes.
Naomi Dienner is newly widowed and pregnant with another child her late husband never knew she was carrying. Stephen was often loving but sometimes both physically and verbally abusive to her, though never to their children. She is anxious about the success of this pregnancy, having already lost one baby, and when an older lady turns up at her house seeming to have all sorts of knowledge about things she should not have known, and claiming to be able to provide protective herbs and charms to help Naomi carry her baby safely to full term, Naomi falls prey, much to the dismay of her father's Englisch friend Brock, who has come to help Naomi harvest the crops on her farm.
Can Brock persuade Naomi to abandon her trust in such charms and have faith in God's goodness and will for her, and indeed for them both? And can Naomi learn to trust a man again after her bad experience with Stephen?

When Janie Lantz witnesses an accident between a car and a buggy giving tours to tourists being driven by Jonathan Stoltzfus, she feels compelled to help those injured and to protect Jonathan's job by witnessing to the truth of what she saw. A quiet friendship springs up between the two, to the dismay of her father, who feels that  the age gap between his daughter and Jonathan is too great to make a successful relationship - and also the fact that Jonathan is only a temporary visitor to the area. Janie is torn between respect for her father's wishes and the desire to see justice being done and a good man's name being cleared. Is there any way she can reconcile the two?

A Quiet Love by Kathleen Fuller

Dinah Keim is initially upset when her mother arranges for her to go and stay with her Aunt Judith for a few weeks. She is self-conscious about her stammer and prefers to stay out of the public eye. She is catapulted into the midst of a family catastrophe when Judith's husband David is injured during an accident on the farm and Dinah lays an important role in saving her step-uncle's life. She is thrown into the company of the handsome Amos Mullet, David's son, whose unusual ways and demeanour help to bring her out of her shell and forget about her stammer. She in turn supports and encourages this young man whose family have done their level best to protect him from harm and help him come to terms with his being on the autistic spectrum, but she feels they have in some ways over-protected him. Their friendship blossoms into love, and some surprising secrets are revealed as time goes by.

Mischief In The Autumn Air by Vannetta Chapman

Martha Beiler is widowed, lives with her sometimes cantankerous aunt and she works for Eli Wittmer in his auction house. The unusual behaviour of a young couple inspecting some furniture at the pre-auction viewing raises her suspicions;  her suspicions convince her boss and their combined sleuthing uncovers a detective story involving  a treasure map, furniture and the history of her adoptive Amish community, as well as paving the way for a new romance....

Posted by Elizabeth @ The Garden Window at 9:47 pm No comments: 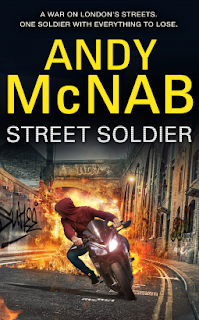 Sean Harker is a Londoner from Walthamstow's Littern Mills estate. He's a street kid, a member of the Littern Guyz gang; when a theft goes wrong, he takes the rap and ends up in a Young Offenders Institute. When he is offered a chance to leave the YOI early and join the Army instead, he is torn between his loyalty to his gang, some of whom are already at the Institute, and the chance to make something of his life - rather than be  always looking over his shoulder, waiting for another crime to go wrong and ending up in prison for a very long time.

He chooses the Army after witnessing the suicide of a friend in the Institute and vows to make something of his life. Everything is on track, he is settling down well ...until he becomes mates with Corporal Heaton, who has a flash car, a flash pad and a flash lifestyle. Sean is persuaded to help "liberate" some firearms from the Army, allegedly to help protect the general public from terrorist attacks and those who would subvert the British way of life. That, and a chance of ready cash in return seems like a good idea until he discovers that  Heaton is working for a very unsavoury group of people who claim to be good guys but are no better than those they despise.

Sean has to make some hard decisions abut whom he can trust, whom he should trust and where his true loyalties lie - with his mum, his street gang mates or the Army. How far could he or should he go to serve and protect his country?

This is a hard and gritty story indeed. Definitely not for the faint-hearted or squeamish, it portrays the harsh mindset and activities of street gang life, crime, violence and the criminal justice system as experienced by juveniles in detail as well as Sean's Army training and experiences. Targeted at older teens/the YA market, I found it a really gripping read with a definite message that even if you mess up your life, you can always find a way to turn things around.

Posted by Elizabeth @ The Garden Window at 12:38 pm No comments: 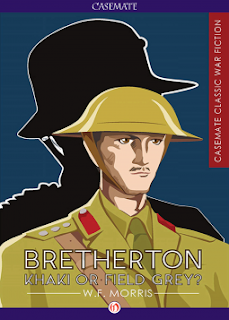 A classic, happily now re-published after its debut in 1930 and regarded as a founding giant in the field of espionage/thriller fiction; this is a brilliant read for fans of the genre or for those who simply enjoy fiction about the Great War.

It's November 1918. The Germans are being chased into their final retreat and Captain Gurney takes part in clearing the area of hostile troops. Imagine his shock and bewilderment when he finds, in a chateau, the body of a man whom he recognises instantly, for he knows him well, but now he is dead and dressed in the uniform of a German soldier....what on earth has been happening?

His fellow officer Gerard Bretherton had been listed as missing after being seen to be injured. Why was now he here in the chateau impersonating a German officer?  Or has a German officer been playing a game of double-cross and impersonating him? Who is the woman found dead without a mark on her?

This is just the start of a truly gripping story, graphically describing the horror, physical and emotional trauma of war and the devastation it causes to those fighting in it and their loved ones.. Narrated initially from the viewpoint of Captain Gurney, then jumping back a little chronologically to recount events from Bretherton's viewpoint, I found this to be a compelling story indeed, and well worth reading.

Full marks to the publisher for making this title available once again for a new generation of readers.

Posted by Elizabeth @ The Garden Window at 8:37 pm No comments: