Book Review : Trip Of The Tongue 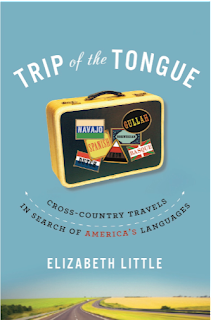 "Trip of the Tongue"

I have always been fascinated with languages and even as a child, I would read our huge family dictionary for hours. My interest in language broadened into a love of classical Latin, German and French as I grew older, and it was with immense delight that I discovered this book, "Trip of the Tongue".

Subtitled Cross- Country Travels in Search of America’s Languages, Elizabeth Little outlines her own passion for languages, explores the incredible diversity of languages heard in her own home in  New York City and goes on one of the most interesting journeys I have ever read about -  in search of America's more unusual languages. Unsurprisingly,  Native American languages are well represented by Crow in Montana, Navajo in Arizona,  and the much more endangered Lushootseed, Quileute and  Makah in Washington.

The presence of Basque in Nevada  and African Gullah spoken in South Carolina - as in the Br'er Rabbit stories - were unexpected delights, as was Norwegian in North Dakota, though I did have some vague memory of reading about Norwegian settlers in Laura Ingalls Wilder's Little House series. Haitian Creole in Florida was also a bit of a surprise, and made a fascinating and diverting chapter.

The languages I expected to see, namely  French and Creole in Louisiana, Spanish in New Mexico and English in Los Angeles were treated in a way I found amusing, fascinating and absorbing. She manages to cram in a vast amount of historical and language information throughout the book, occasionally so much so that reading felt like being on a rather exhilarating rollercoaster ride !

It never ceases to amaze me how all languages work, and yet can be so very , very different from each other in construction, idiom, grammar and  sparseness or  profundity of vocabulary, and I found myself pausing for thought and wonder on virtually every page. I have no formal background in linguistics and had to concentrate quite hard on some parts of the book, especially the presentation of the Navajo verb template on page 38 for instance, but it was well worth the mental effort to disentangle the component parts.

Of particular interest throughout the book is the analysis of why languages decline and how native speakers feel about them.  The gradual decline of many of the languages featured caused me sadness, but the fact that it is possible to study them at college/university level  is a step in the preservation of them for posterity and I sincerely hope the youngsters will one day realise what a precious treasure they have, and how desperately sad it would be to allow their languages to die out  completely in favour of the all-pervading English. Modern technology is allowing language programs to be created for a variety of platforms and formats, including phones and the less common languages are beginning to be better represented too, which is a cause for optimism.

The historic ill-treatment of native language speakers in schools was sadly all too familiar a story to me, as the same things happened to native Welsh speakers in my own family when they attended schools where English was made mandatory.

For me, the only jarring note was a fairly frequent use of the "f" word, which seemed completely unncessary in a book of this calibre, but apart from that, I thoroughly enjoyed it and was sad to reach the end !
Share with friends using the share button below.

Posted by Elizabeth @ The Garden Window at 9:09 pm 3 comments:

I have read twenty three of  these.
How about you ?

Via Teach.com and USC Rossier Online

Posted by Elizabeth @ The Garden Window at 12:19 pm No comments:

Published in 2011 by Stewart, Tabori & Chang


The book is split into four main categories: Motherhood, Home, Community and Legacy,  and is  filled chockablock with anecdotes, musings, recipes and  most importantly of all, knitting project patterns for the reader to undertake.

I share the author's wistfulness at not being able to pass on her fascination for and love of knitting to her family as I have had the same problem with my own daughters; they like what I knit for them but they either don't really want to learn it themselves, or find it extremely difficult to do so when they are left-handed.


Filled with lovely illustrations, much of the book made me giggle in delight at finding a fellow knitting fanatic who cannot pass a wool/yarn shop without admiring, handling, coveting and eventually buying wool to add to an ever increasing mini-mountain at home.

Some of the projects included are mittens, slippers, afghans, lacy scarves and egg cosies; it has inspired me to seriously consider attempting to knit socks, which have always previously filled me with terror, as the pattern she gives can be turned into mittens if you find yourself doubting your commitment, enthusiasm or technical ability to complete socks!

A delightfully homely book in every sense of the word; centred around family, home, love, life and laughter and the many, many joys of knitting.

Posted by Elizabeth @ The Garden Window at 3:08 pm No comments:

I am pleased to report that Mrs DoomHamster, though still quite bruised, is up, about and on the mend, sporting a very fetching bright purple cast after her visit to Fracture Clinic last Friday. Everything  appears to be healing well, thank God :-)

I have completed yet another two courses of antibiotics for a wound infection, and am due to see the Consultant soon to plan the next and hopefully last big operation.Everyone else is well and we are slowly starting to sort out Mum's personal effects now, which is stressful in its own way, even if the lawyers are sorting out all the tax/legal business.

Latin classes continue to be an absolute joy and endless fun; I do enjoy being the baby at 48 years old !

I have a mini-mountain of book reviews to post, so please bear with me............. I also have two book giveaways to announce very soon, thanks to two exceptionally kind authors who have provided me with the books :-)
Share with friends using the share button below.

Posted by Elizabeth @ The Garden Window at 3:02 pm 3 comments:

My eldest daughter, Mrs DoomHamster, suffered a mishap on Friday night. She had gone out with her grandparents and was having a highly enjoyable evening  until she slipped and fell. As is normal behaviour, she put out her hand to break her fall, and instead unhappily fractured her right wrist in two places. As she is right-handed and a secretary by profession, being unable to write or type is Not Good......

Mercifully it was a very quiet night in A&E so she was seen very quickly and has her arm in plaster. She will be going to Fracture Clinic at the hospital on Friday to have her split cast checked and presumably replaced with a more permanent one, so she is pondering what colour to choose and how best people may autograph it !
Share with friends using the share button below.

Posted by Elizabeth @ The Garden Window at 8:36 pm 2 comments:

It was a delight and a blessing to be able to go to Church for the Pentecost Liturgy.

I had packed the cool-box with the food I had prepared, prayed for a safe journey and The Hubster was loading up the car. I was about to leave the house and lock the front door when I had the truly overwhelming urge to go back and pick up my new, brightly-coloured long scarf which is really wide, and wear it knotted round my neck. I listened to that inner prompting, having felt increasingly drawn to covering my hair for private prayer at home.

When I got to Church door, I could see that  two of the four ladies already there were also wearing headcoverings, so it was a five second task to listen to the call of my heart, lift up one fold of my scarf and cover my own head too as I walked in through the door.   This is a parish which does not normally expect or have women covering their heads in Church, but I have been thinking about doing it for a long time and didn't want to draw attention to myself by being the first one, or to make anyone else feel uncomfortable by my actions....

It made such a difference to wear a covering during the service, though I cannot put into words exactly why,  and I do not think I would willingly attend the Liturgy again with my hair uncovered. I am still pondering and processing exactly how I felt, but deeply attentive and respectful spring most readily to mind........
Share with friends using the share button below.

Posted by Elizabeth @ The Garden Window at 8:29 pm 3 comments: