A Month Of Cookbooks - Day Nine 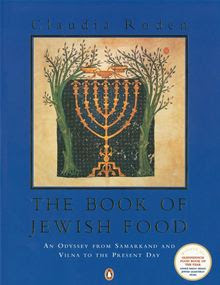 The Book of Jewish Food: An Odyssey from Samarkand and Vilna to the Present Day

This is a hefty, almost encyclopaedic 592 page book which covers the history of Jewish food across both Sephardi and Ashkenazi traditions, though the Sephardi tradition is given much greater space in the book.

The Ashkenazi traditional dishes are well-known in the UK and throughout Northern Europe, but the Sephardi recipes are rather ore of a mystery, not least because intermarriage between the two traditional was not encouraged and they very much tended to keep themselves to themselves; the recipes are indeed a revelation.

Included are many of Claudia's traditional family recipes from Egypt, but there are recipes from almost everywhere the Jewish people have settled, including Iran, Algeria, Iraq, Bukhara, Syria, Turkey,Italy, Morocco, Andalusia, the Balkans, Greece, America and many more.

Claudia Roden delights in giving glorious recipes, photographs, historical snippets and insights into Jewish religion, food and culture in amongst the recipes.  I was particularly interested in the fact that Sephardi families do not have a traditional Shabbat bread (such as the Ashkenazi families do with Challah);  I am now in frantic search of anise seed so I can try making the wonderful Algerian Anise Bread................

A glorious book to browse, savour and thoroughly enjoy!

Posted by Elizabeth @ The Garden Window at 7:21 pm

Email ThisBlogThis!Share to TwitterShare to FacebookShare to Pinterest
Labels: A Month Of Cookbooks

I love everything by Claudia Roden and I've been very tempted by this one more than once but I try to (a) limit cookery books and (b) limit again to predominantly veggie ones. The anise bread sounds gorgeous though. I didn't get round to the copha cake recipe before the chaplain left but I'm thinking of making it for guests and posting a pic on FB, would that be very bad of me? :)

No, you are merely practicing to get it perfect before you make one for The Chaplain :-)