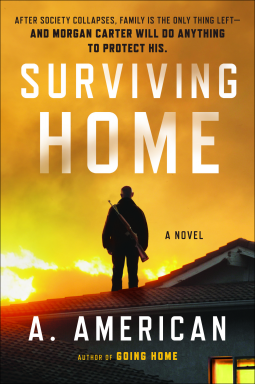 
Morgan Carter thought that getting home to his wife and daughters after an eventful 250 mile trek was going to mark the end of his immediate problems after modern life as he knew had reached an abrupt and dramatic end. After all, he lived in a nice, close-knit community, he had prepared well for any eventuality that might befall his family and he was hoping that he could just get on with providing for his family and doing his best to re-build their lives in this new world.


What he had not bargained for was the level of  in-fighting, greed, suspicion and downright hatred  from some in his community who had not made any preparations for their own families; when it became obvious that the Nanny State was not coming to help them anytime soon, they decided that they had the right to take whatever anyone else had had the forethought to prepare. The law enforcement officer in their neighbourhood was way out of his depth and unable to effectively secure the locality or dealing with crime and threats of violence.

As if this was not bad enough, the friends and allies Morgan had made on that trek home were facing their own sets of problems and it was becoming horrifyingly clear that  much of the FEMA camp forced relocation and forced labour solution the state was mandating was for a much more sinister purpose than was first believed. The friends reunite for a common cause and mutual help, which is just as well, as individually, their situations were reaching critical points.

Parts of the book are quite graphically gruesome and I nearly "lost my lunch" at one point, but it is a fast-paced and action-packed thriller of a book which kept me compulsively turning every page.  I hope that volume 3 will not be long in appearing as I really do want to find out what happens next!

Posted by Elizabeth @ The Garden Window at 9:36 pm