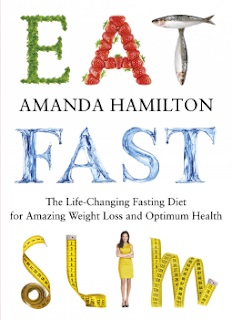 
Several of the books I  have previously read about Intermittent Fasting have outlined  several days of 16 hour fasts or two full day fasts with only an evening meal. Amanda Hamilton provides similar information along with what you need to consider if you are adding exercise to your routine and also a variation adding juice fasting to the menu of foods.

The science behind Intermittent Fasting is explained clearly, simply and succinctly along with its proven health benefits apart from simple weight loss/maintenance. I cannot work up any enthusiasm for colonic hydrotherapy which she describes as beneficial to many people, though....

Part Two of the book shows how to tailor IF to work for the reader's own individual circumstances. Men and women also react to fasting differently and women would be better advised to start IF a few days after the beginning of a menstrual period. The chapter on cultivating a "fasting state of mind"  is partly based on the author's predilection for meditation and yogic practices which may not appeal to every reader although the information about the effects of sleep deprivation on appetite I found fascinating.

Part Three tells the reader how to actually put all the theoretical information onto practice and start safely fasting; she outlines eating nutritionally sound meals and  how much exercise can you or should you - take whilst fasting, as well as when you should not fast or when you should stop fasting.

Part Four provides countdowns for easing gently into fasting patterns and a very good selection of suggested menus with their accompanying recipes.

This is a great book, accessible, clear and persuasive even though I did do a "double-take" on p 25 of the ebook where she says "There are a mind-boggling number of faiths and religions that have a version of fasting within their sacred texts. These include but are not limited to Sikhism, Baha’i, Judaism, Jainism, Hinduism, Mormonism, Christianity, Greek Orthodox, Catholicism, Taoism, Buddhism and Islam."

- Does this mean that she does not consider Catholics and Greek Orthodox to be Christians, and if so, why does that not apply to Russian Orthodox too? The Eastern Orthodox family of churches are actually the only ones who do expect their members to fast regularly throughout the year.....

Posted by Elizabeth @ The Garden Window at 1:38 pm