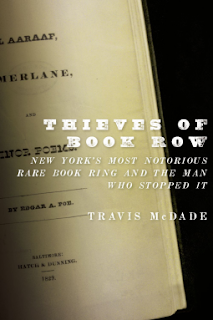 Thieves Of Book Row:
New York’s Most Notorious Rare Book Ring and the Man
Who Stopped It

Crime is not the first thing one would necessarily associate with libraries, but libraries have been faced with the problem of thefts of their rare books ever since their inception and continue to do so.

The scarce poetical works of a youthful Edgar Alan Poe open the story and we are introduced to Al Aaraaf - the first collection of poems published under Poe's own name, and although uneven in quality, it was highly prized for being incredibly rare with a print run of only 250 copies.

One was enshrined in New York's Public Library, until a young man using an alias asked to see it......it eventually ended up on Book Row, the home of a huge number of second-hand and antiquarian booksellers, some dealing only in highly specialised fields, others being general booksellers.  Some happily dealt in books whose legitimate ownership was rather muddy to say the least. There was a thriving trade in "sophisticating" books by a variety of methods; one involved taking apart several volumes and incorporating the most attractive and rarest parts of each to produce a volume which would be attractive to collectors.

Thieves Of Book Row details the activities of one particular and notorious ring of thieves who targeted the libraries - both public and university - of the East Coast and  sold the books onto other booksellers and collectors. This is a truly fascinating account of how books were stolen, often to order for specific clients all over the world. All traces of previous homes had t be removed, whether ink stamps, embossed stamps , perforations - all could be removed or disguised given enough time and money. But who were these thieves, and how were they eventually stopped? What could be done to improve the security of rare book collections?

An investigator named G. William Bergquist took up the challenge to halt the activities of this gang,which was led by Harry Gold and his associates, and this is a gripping reconstruction of the battle of wits between the two sides.

Posted by Elizabeth @ The Garden Window at 2:26 pm