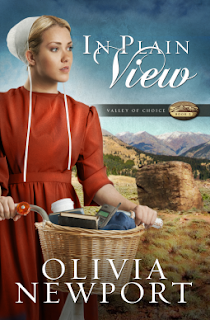 
This is Book 2 in the "Valley of Choice" series and follows the story of Annie Friesen, whose initial encounter with the Amish I reviewed here.

Annie is now immersing herself more fully into an Amish lifestyle as her relationship with Rufus Beiler continues to deepen. Her family remain bemused by her choice to abandon her successful business and modern lifestyle in favour of Plain living, and as she continues to become more Amish, Rufus' sister Ruth becomes more entrenched and settled in the Englisch world.

The arrival in the community of old friends from Rufus' childhood marks a strained period for Annie, as the unmarried daughters of this family are all accomplished young Amish women and looking to find spouses in the district; hospitality dictates that Rufus has to be polite and helpful to them even though his heart is well and truly given to Annie. Life becomes even more complex when his brother Joel becomes moody, secretive and involved with a group of other young Amish and Englisch boys who get themselves into trouble and danger, in turn threatening a valuable community project which would have united the Amish and Englisch folk of the area.

Interspersed with all the modern day drama is the continuing story of the separation of the two strands of the Beyeler family during the American War of Independence and I was fascinated by the history of this period and how difficult it was for the Amish of the time who tried to remain neutral and pacifist in a time when  not belonging to one side or the other made you a traitor and a threat to both.

A highly enjoyable read, and one in which Annie's faith becomes deeper and believable when her position in the community comes under threat.

Posted by Elizabeth @ The Garden Window at 12:51 pm