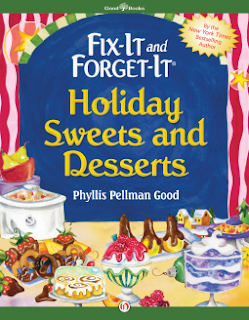 
I always seem to struggle with getting a suitable dessert which can be made in good time and not worried about when I am in the midst of cooking lots of other dishes, so I was really pleased to see that there is a title devoted just to desserts in the useful Fix-It And Forget-It series.

Ideal for busy cooks, we now have a cookbook of slow-cooker/crockpot desserts which can be prepared well in advance and left to their own devices in the slowcooker while other dishes are given attention.  With few exceptions, these dishes use ingredients easily available to the UK and American cook alike, though I will need to investigate and experiment to see if the prepared box cake mixes in the UK used in some recipes will produce the same volume as their American counterparts. I am sure my family will deal heroically with having to endure multiple repeats of desserts in this endeavour!

So what, I hear you exclaim, are the desserts? Well, there are fifty recipes (many of which are contained in the Christmas book of this series) and they range from Christmas Apple Date pudding and Apple Cranberry Compote to Lemon Poppyseed Upside-Down Cake and Harvey Wallbanger Cake, with some great chocolate based puds including Chocolate Fondue, Fudgy Peanut Butter Cake, White Chocolate Bread Pudding and Chocolate Covered Pretzels. Many of the recipes would transplant easily to festival cooking for all seasons, not just Christmas, and I am glad that this book has been titled for Holidays in general.

None of the dishes are complex, and the majority are very forgiving of being kept warm in the slowcooker for an extra hour without diminishing their taste or texture. The only problem I now have is that I really need to have more than two slowcookers to make the most of the recipes in this great series!

Posted by Elizabeth @ The Garden Window at 9:41 am