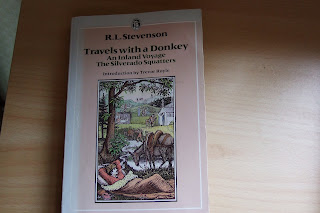 I was really looking forward to reading this treasury of three books. Everything else by RL Stevenson I have ever read I have really enjoyed; maybe I was just in the wrong mood or frame of mind to do this book justice. I may leave it a year or two and give it another try, to see if I can be a little more dispassionate about it......

"An Inland Voyage" was his first ever book, detailing a canoe journey through some rivers in Belgium and France. I found it pedestrian and verbose, not to mention really rather dull.

The rather more famous "Travels With a Donkey" did at least have the benefit of humour and some rather spectacular places to write about as he travelled through the Cevennes with Modestine the donkey.
Of particluar interest was his interaction with a Trappist monk who was most concerned for the salvation of Stevenson's Calvinistic Protestant Church of Scotland soul......but RLS's unabashed disdain throughout the book for much of what he deemed Catholic superstition made me realise how far apart much of Protestantism is from Catholicism, let alone Orthodoxy, and it is really rather sad to see some fellow believers in Christ treated with such contempt.

I wouldn't say I enjoyed that book, either, but the worst was yet to come in the third book, "The Silverado Squatters", where RLS and his wife spend a rather uncoventional honeymoon in the wine-growing regions of California.

To say that I read the chapter about the Jews he met on his travels with sadness would be an understatemnt. He fell into all the stereotypical snide comments about Jews and usury that you would expect from someone of his age and prejudices, and it upset me greatly. I know we should not judge the prejudices of a distant age with our own "enlightened" eyes, but I found it hard to enjoy the admittedly lovely descriptions of the Californian scenery after that.

RLS would almost certainly be convicted of inciting racial/religious hatred if he were to be publishing these books for the first time in the UK now.

To be honest, I would not bother reading this compilation. Has anyone else read any of the stories? Should I give them another try later on ?
Share with friends using the share button below.

Posted by Elizabeth @ The Garden Window at 12:35 pm

i enjoyed these various posts about books! My best wishes to you :)

Idols always have feet of clay, they're supposed to ;-)