I have been awake since 5am, tidying up my computer.

Whilst working full-time, I have found it impossibly hard to keep up to date with all the blogs I follow. Although I use Bloglines,  I have amassed 472 RSS feeds. On a daily basis, that is an awful  lot of reading matter !

I have not deleted any of my Ortho-bloggers, but have severely cut back on the number of RC, Anglican, medical and miscellaneous blogs; so much so that I  have reduced my feeds down to 285, which is a much more manageable number :-)

I do intend to prune this back even more over the next few weeks. Quality, not quantity !

Hopefully, I will then have time to write more on my own blog as a result, LOL.
Share with friends using the share button below.

Posted by Elizabeth @ The Garden Window at 8:08 am 6 comments:

Posted by Elizabeth @ The Garden Window at 8:00 pm No comments:

I Simply Love This !

Posted by Elizabeth @ The Garden Window at 7:46 pm No comments:

I was not offered the job for which I was interviewed today.

I am disappointed, but sure that the Lord has His reasons, and has other plans for me.

Not my will, O Lord, but Thine be done.
Share with friends using the share button below.

Posted by Elizabeth @ The Garden Window at 7:56 am 2 comments:

You know, the enormous amount of love and prayer you all shower on me makes me feel very humbled indeed.
Thank you all so very much for all your messages of support and prayers; they are all very much appreciated !

In answer to questions asked:-

The books listed were read over the last five weeks; I have got a few more to add as I had a marathon read-a-thon session in the bath last night which lasted so long the water went cold and DH was about to send out a search party :-)

I have also read a few things on my e-reader, namely LM Alcott's "Jo's Boys" (I love that book so much!) and some Harry Potter fanfic.

About The Dog ...... DH went down on Tuesday and reported that the dog seemed a bit more settled, but wouldn't let DH pat him. He told his mother that if the dog was too much for her, the dog would have to be rehomed. It didn't go down very well and she is adamant the dog is fine and wonderful and that she can cope.

Part of the problem is that only my DH and I have been told by her GP of M-I-L's illness; she hasn't been told and the rest of the family haven't been told. Perhaps now is the time. But that will need to be discussed again with the GP.

And of course she will refute the suggestion that she has a degenerative mental illness vehemently; so will some other family members, who are in complete denial of what is in front of their face........after all, doesn't *every* 70+ elderly lady decide on the spur of the moment to go and buy a large, powerful, highly demanding dog which they will still need to be walking and tending when they are 85?

My own mother has wanted another dog for several years, but has always said that she knows she is not well enough to care for even the most placid and sedate couch potato of a dog, so she contents herself with her elderly cat. But she doesn't have dementia, and has made a sensible and rational decision.............
Share with friends using the share button below.

Posted by Elizabeth @ The Garden Window at 7:51 am 4 comments:

The first week of Great Lent is almost over; I haven't been to a single service, haven't even read any of the services at home, which I normally do.

I never even got round to asking forgiveness of y'all on Sunday, which I do so now most humbly.

Fasting has been erratic to say the very least.  The young ones are off for half term break and I am trying hard to get all the laundry etc done in good time for next week's return to school.

Between mother and mother-in-law, we seem to lurch from one anxiety and crisis to the next.

I am managing to hang onto the barest shred of a prayer rule with gritted teeth and clutching fingers, like a drowning man grasping at a straw.........I am praying one stasis of Psalms daily for those whom I know are in need of prayers, and am managing so far to read one chapter of Isiaih daily, as well as one chunk of "Christ in His Saints". More than that is beyond me.

I am just so tired. Work, housework, cold wet dark days are all rather grim at the moment. It must be Lent !

On Tuesday, I have my job interview.  Prayers for the acceptance of whatever is the Will of God for me will be most welcome !
Share with friends using the share button below.

Posted by Elizabeth @ The Garden Window at 8:00 pm 8 comments: 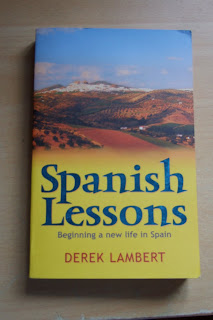 Both of these two were enjoyable, the book about cycling around Greece particularly so ! 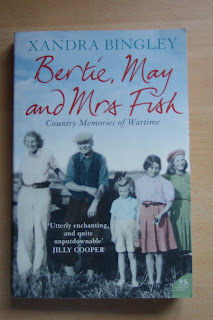 We Are At War was excellent, the second I wouldn't bother with reading unless you are utterly horse-crazy  like the narrator's family and don't mind the narrator's mother appearing to be far more upset about the death of her prize bull than she was about aborting her second child. That just really upset me. 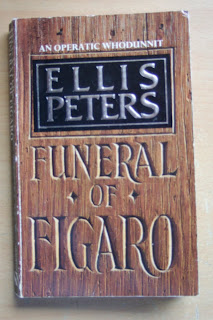 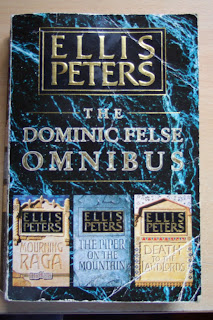 Ellis Peters never managed to write a substandard detective book, in my opinion. Both of these are looking very tattered and dog-eared; they are much-loved and frequently re-read books :-) 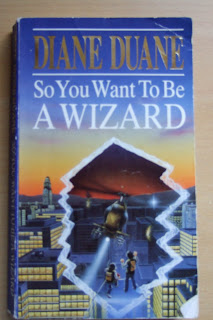 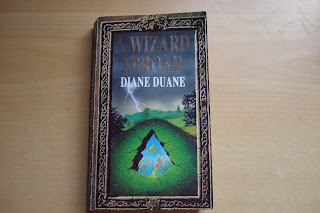 I really like Diane Duane's books. Far too good to be marketed primarily for children ! 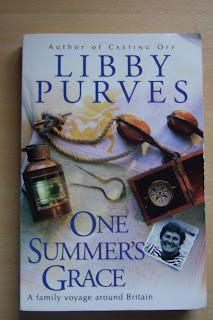 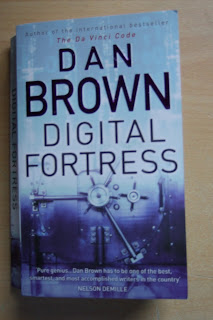 I like most things Libby Purves writes, and her story about sailing around Britain on a small boat with her young family is wonderful. It makes me so sad to know that the lovely son about whom she writes so vividly,  ended his own life a few years ago when suffering from a catastrophic episode of depression, despite having wonderful family support. Kyrie elesion....
The Dan Brown thriller was actually surprisingly good. I loathed and despised  his Da Vinci Code  beyond  all words, but was recently convinced by a colleague to try one of his non-religion based thriller stories. It was actually a good read; I read it in one sitting. Your mileage may vary, of course.....
Share with friends using the share button below.

Posted by Elizabeth @ The Garden Window at 3:40 pm 2 comments:

The Wonderful World Of Lauren Child 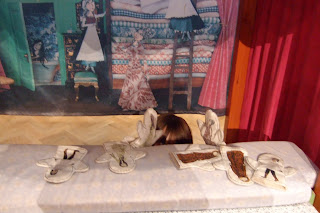 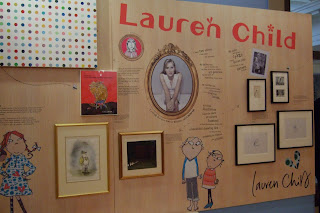 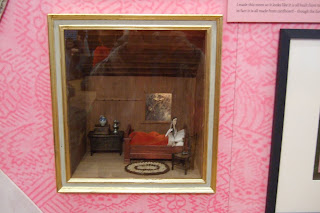 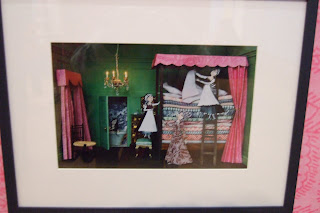 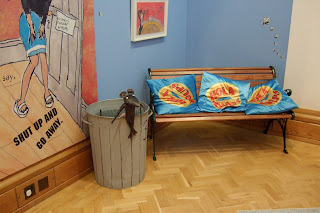 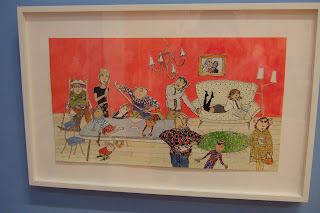 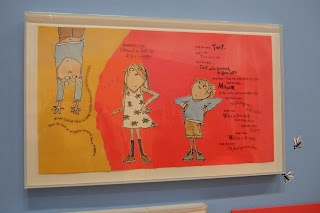 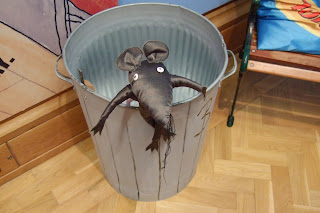 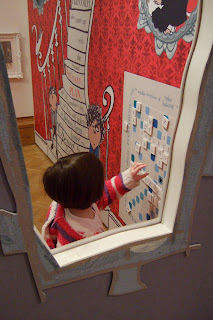 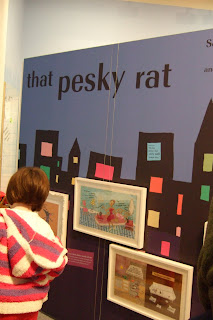 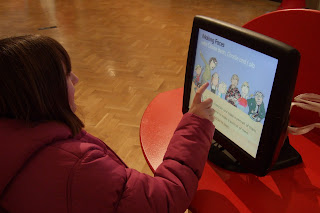 We recently went to the travelling exhibition about the works of Lauren Child, the talented author and illustrator of the Charlie & Lola, Clarice Bean series and  many more books for children. It was so very good that we ended up going back the following week too :-)
A particular delight was the provison of dressing up clothes a la Charlie and Lola, a puppet theatre, a large version of Connect Four and wonderful child-sized mock-up rooms of scenes familiar from the books, which the children could walk through and play with the props. There were so many children there that it was difficult to get shots which did not include other people's children, which we were told we were not allowed to do. Hence the paucity of photos.
Share with friends using the share button below.

Posted by Elizabeth @ The Garden Window at 3:18 pm 2 comments:

The Dog Of Doom And The Psychotic Budgie

On Friday, I was in work all day and DH was home, minding the dog.
When I got home, DH took me into the kitchen, away from the tender ears of the young ones, and related to me a tale of some length, moderate tension and extreme hilarity.

DH noticed that the budgie's seed bowl needed refilling, so he opened the cage door. Charlie, the afore-mentioned psychotic budgie of doom, seized the opportunity to zoom out of the cage and apparently   managed to disappear into thin air, to DH's dismay. DH searched diligently and turned to look at the dog, who was sitting on the settee, licking his lips, as if finishing a tasy morsel.

Needless to say, this increased DH's panic exponentially, and he redoubled his search with increasing desperation, only to eventually discover the budgie happily sitting on the floor, nestled amongst the TV/DVD cables and hidden by the other settee.

DH's relief was profound, and he stripped off his top to cover Charlie up whilst transferring him back to the cage - a necessary precaution as Charlie can bite like the very devil. We don't call him psychotic for nothing !

DH never did find out why the dog was licking his lips, but at least we didn't have to break the news of the budgie's untimely end to the children that day....