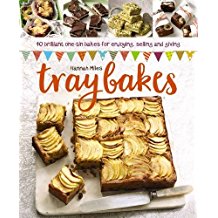 I found this book in my local library and simply had to check it out and bring it home!

My daughter very kindly offered to do a test bake of one of the recipes, so she made the Apple Shortcake bars, which were absolutely delicious.

The only downside was that these really are large traybakes, and we ended up eating the bars quite literally for days.

An absolutely wonderful book if you need to cater on a large scale for school/parish events, bake sales, parties etc, but otherwise the recipes really do need to be scaled down dramatically for normal domestic use which I did not feel confident doing.
Recipes were varied and fun,  including Brownies, Blondies, a variety of Flapjacks, some appropriately Healthy Eating recipes and some gluten-free recipes too.

Posted by Elizabeth @ The Garden Window at 7:36 pm No comments: 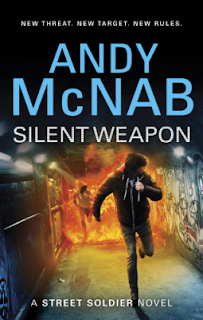 
This is the second in the "Street Soldier" Young Adult series about Sean Harker, former gang lad and petty criminal, who gets recruited into the Army in the first book.

Sean has made good, turned his life around and created a whole new life for himself in the Army, after an admittedly pretty rocky start. Fresh from a tour of duty abroad, he is expecting to arrive safely back in Britain and then prepare for some holiday leave in sunny Tenerife, but things do not go according to plan. Their civilian plane is diverted and then the airport is attacked by terrorists.

Caught right in the middle of it all, Sean and his companions fight back....but this is not the end of the problem, in fact it is just the very beginning of a desperate search against time to track down the terrorists and disable their deadly biological weapon hidden on Sean's own home turf by people he knows from his past.

This made utterly compelling  and eye-opening reading; I found I was rapidly sharing Harker's concern, anger, disbelief and fear that radicalisation and terrorism could take place on his estate in London, among the people he knows and has grown up with. Everything he has believed about terrorism until now is turned on its head and he has very limited time to use his local knowledge of places and people to find those responsible and discover exactly what the weapon is before it is too late and a pandemic is unleashed.

An excellent story, which I ended up reading in one sitting and couldn't put it down. How on earth he is going to top this particular book, I have no idea, but I am equally sure that he will manage it.

Posted by Elizabeth @ The Garden Window at 4:56 pm No comments: