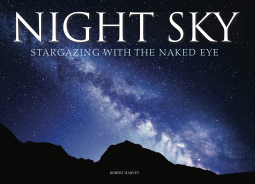 Only one word will describe this book: Wow.

Robert Harvey believes very passionately that looking at the night sky with the naked eye is part of our cultural heritage throughout millennia, no matter where in the world we live.

People have always gazed up at the night sky in awe, reverence and delight at the beauty of the stars and the moon, and it is only in recent generations that people who live in large towns and cities are being deprived of this joy by light pollution.

It is, however, still possible to stargaze with a little planning. Many erroneously believe you need a telescope or pair of binoculars to stargaze, but that is not the case. All of the photos (bar the one of a nebula) have been taken using the author's naked eyes, a digital camera and a tripod, and what a delight the photos are. Stars, the moon, a few of the planets, annular and partial eclipses of the moon, the Milky Way, the Northern Lights are just a few of the things which can be easily observed even by the novice stargazer.

The book is helpfully divided into regions so you can easily see what it is possible to observe in Europe, North America, South America, Australasia, Africa and the Middle/Far East.  Many famous and quite a few lesser-known landmarks are included, so the photographs cover places many will have some knowledge of from their own region, which adds to the attraction of the book.

This is definitely a book I will be buying.

Many thanks to the Publisher for making a copy of this available via NetGalley for me to read and review.

Posted by Elizabeth @ The Garden Window at 11:36 am No comments:

Traditions of Death and Burial 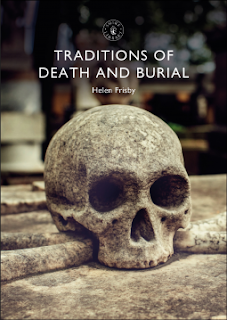 Traditions of Death and Burial
By Helen Frisby
Shire Publications,  2019

Despite the cover, this is not a macabre book at all, but instead an excellent introduction into the whole panoply of traditions and beliefs surrounding death and burial in English society from 1066 onwards.

For me, the most interesting chapter covered how the doctrine of Purgatory influenced church art, decorations, stories, documents, pious customs and works of mercy to free those souls believed to be in Purgatory, right up to the architectural development of Chantry Chapels in larger churches and cathedrals where Masses could be paid for in perpetuity for the repose of someone's soul...or at least until Henry VIII put paid to that with the Reformation.

Depictions of death and the afterlife in churches, manuscripts and books provide lots of welcome visual details; the book is profusely illustrated and the author has provided many excellent examples of death traditions from popular narrative poems and stories as well as the expected practical details of laying out of corpses, embalming, burial services and grave monuments.

Deaths during epidemics make for sobering reading, but it was not just medieval plagues such as the Black Death which people had to worry about... smallpox, cholera, measles, typhoid and diptheria could cause huge numbers of deaths during outbreaks right up to the twentieth century. War, of course always produced horrifying numbers of deaths for virtually every generation to deal with, and looking at photographs of the Commonwealth War Graves remains very sobering indeed.

Celebrity funerals past and present, death cafes, hospices, euthanasia and suicide clinics are also touched upon in the chapter on modern times, and it is quite staggering to look at how society's views of death and burial have changed dramatically over the course of a millennium. Whether for better or for worse is a moot point!

A thoroughly absorbing book, surprisingly fascinating. Well worth a read.

Many thanks to the publisher for making a copy of this book available for me to read and review via NetGalley.

Posted by Elizabeth @ The Garden Window at 10:50 am No comments: