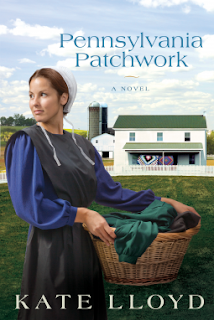 
Holly Fisher is a thoroughly modern woman, complete with laptop and cellphone, currently engaged to a Mennonite vet but living with her mother Esther and ailing Amish grandmother Anna in Pennsylvania's Amish country.

Esther is engaged to be married to Nathaniel and is preparing to be baptised and join the Amish church, many, many years after she left the community and got married to her husband Sam, who  went missing in Vietnam.  Everyone assumed he died but did he? Did he make it back to America, as the note in the mysterious parcel claims? Is he still alive? Shouldn't Esther divulge this to her daughter Holly, her fiance Nathaniel and the Bishop  instead of destroying the note?

Added to this, Holly's fiance Zach's old girlfriend has turned up, claiming that the little boy with her is actually Zach's son, and one of Holly's old friends turns up out of the blue, determined to court her. Rumours are abounding that Nathaniel's long-missing and presumed dead wife has been seen alive and well, so Nathaniel has to go on a quest to try to uncover the truth which may mean that he cannot marry Esther after all......

Sadly, I have to say I found the characters very "flat" with the exception of old Anna and I simply could not relate to them; the vagaries of the plot left me frantically backtracking through pages to see if I had missed something crucial earlier on, which I found frustrating in the extreme.

Posted by Elizabeth @ The Garden Window at 4:35 pm

I find many od these types of books flat and fake.