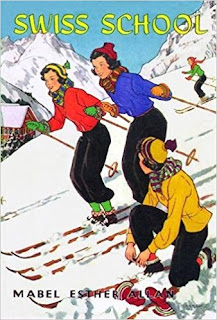 
I am slowly collecting as many school stories by Mabel Esther Allan as I can find, and this is a shiny new reprint produced by  Girls Gone By which I received as a birthday present from my family in the US.

I was especially thrilled to find this was not a stand-alone story but introduced an old friend from "Three Go To Switzerland", Hanni Werter, who befriends the newly arrived Felicity and introduces her to a way of life vastly different from that of her previous co-educational and very progressive school in the Welsh mountains.

There are trials and tribulations, misunderstandings and spats between girls, as you would expect in a school story, but Felicity is a nicely-drawn character and is is a pleasure to read how she settles in the new school and manages to cram in adventures too.
Share with friends using the share button below.

Posted by Elizabeth @ The Garden Window at 2:55 pm