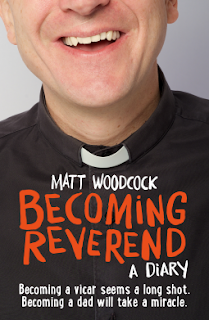 Meet Matt.
An enthusiastic and enthusing journalist, who has abandoned his career in order to attend theological college and be ordained in the Anglican church. He is married to the long-suffering Anna, and his stint at Cranmer Hall theological college coincides with their last-ditch attempt at IVF treatment - so no stress there then!

This was actually a thought-provoking read in ways which I did not expect.  I read to the half-way point quite quickly. I found myself  alternately really enjoying the highs and lows of Matt's life and then thinking either the editing of Matt's diary entries was so severe as to make him seem like a theological lightweight or had been done to make the book as amusing as possible in order to appeal to as many people as possible. I wasn't happy with either scenario, and was seriously considering abandoning the book altogether. I hate not finishing a book, so after a week's rest, I decided to carry on reading.

Then the miracle for which his fellow ordinands has been praying actually happens - Matt and Anna find they are to become the parents of twins. The disparate strands of all the different courses Matt has been studied start to coalesce, liturgical and parochial procedures are starting to become easier and more natural. The unravelling begins with the stress on his marriage due to his having to live at college, leaving Anna to deal with her advancing pregnancy, then the death of his much-loved Auntie Lynne. The young couple are faced with moving away after Matt's ordination, leaving Anna's support network of family and friends far away. Further stresses develop with his fellow ordinands and Matt seems to face problems everywhere.
What made me finish this book? Matt's unrelenting honesty in facing his own shortcomings as a Christian, as a husband and father, as an ordinand, and his fearlessness in apologising, making amends and his hard work in pulling himself together to be more of the person he wants to be. His courage is remarkable, and his character really does begin to shine brightly.

I shall follow his career with interest, and hope that we will have the opportunity to read more about him and his work in the future.

Posted by Elizabeth @ The Garden Window at 2:07 pm