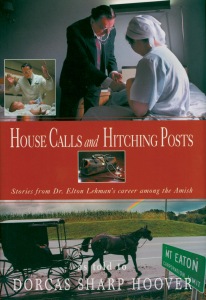 I found out  about this book by accident; when browsing for a related book on an internet site, this popped up as a suggestion, and I am so glad that I did buy it!

Dr Elton Lehman was from a Swiss Mennonite background himself, and shortly after qualifying, he and his wife Phyllis made their home  and his general medical practice in the small town of  Mount Eaton, Wayne County, Ohio in the 1960s. They were soon to count many Amish among their patients and later their friends, and this is a dignified, affectionate and fascinating account of the life and work of this remarkable and devoted physician - and of his long-suffering wife and family.

Dealing with amputated fingers, impalings, traffic and farm accidents, broken bones and serious  illnesses, as well as assisting at the births of many, many babies (6, 300 by the time he retired in 1993) kept him constantly busy and later he was to become assistant coroner for the area too, which was the least enjoyable - but still important - part of his work. He also helped to make medical history when one of his patients proved to have an incredibly rare blood group, which nearly cost her her life.

His constant love and concern for the well-being of his Amish patients greatly endeared him to them, and he was determined to do everything he could to help them maintain their Plain lifestyle, caring for them from cradle to grave.  On a few very sad occasions, he saved lives only to see them snatched away again a few years later, and his own deep  Christian faith as well as that of the Amish families helped them all to come to terms with their losses.

This certainly ranks as one of my favourite books about the Amish *and* about traditional doctoring. It is very good to know that Dr Lehman's son, Brent, has followed in his father's footsteps and continues to serve the people of the area.

Posted by Elizabeth @ The Garden Window at 2:38 pm