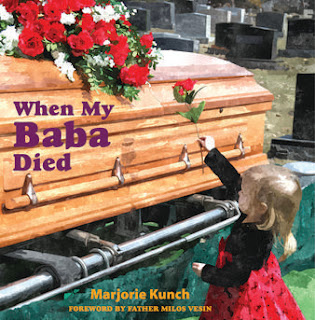 Dealing with death and grief is hard enough for an adult. Trying to explain it to a child and then help the child to deal with the grieving process in a sensitive and loving manner is  particularly difficult, especially when the majority of books written on the subject may not include Christian traditions in general or the burial customs of the Orthodox Church in particular.

In response to this need, a fine book has been written by Marjorie Kunch entitled "When My Baba Died". Marjorie Kunch is an American Serbian Orthodox Christian, a mother and also a mortician, so she writes in an appropriate, informed and sensitive manner; Fr Milos Vesin, who wrote the foreword, is an experienced Priest and Professor at St Sava Theological Seminary, ensuring it is theologically and pastorally sound.

This small book is gently, clearly and sweetly written for children and can be read out loud to much younger children.  The traditions described and illustrated are described in Serbian terms but will be familiar to all Slavic Orthodox, yet the book is of course suitable for all Eastern Orthodox Christians or even also for Eastern-Rite Catholic families. There is a helpful and extensive glossary at the book to explain any terms which might be unfamiliar to the reader.

We learn of the death of a young girl's beloved Baba (Grandmother) and how that made her feel, before discovering what happens at the funeral home, some of the general work the funeral staff do and how they all prepare Baba for the Visitation by family and friends and the prayers of the Pomen ceremony. The second part of the book deals with the funeral service at the church and the final part outlines the procession to the graveside and the burial of the coffin, as well as the forty day Memorial.

I especially love the profuse colour illustrations; they are all based on photographs shot on location at the Bocken Funeral Home and the Elmwood Cemetery in Hammond, Indiana, and at the Serbian Orthodox Church of the Archangel Michael at Lansing, Indiana. The photographs have been carefully re-rendered with an artistic painted effect to be clear yet not overly-stark or frightening to a small child; they illustrate the funeral process beautifully, including the Last Kiss, without causing fear or distress. Excerpts from the prayers of the funeral service are included too.

I really cannot praise this book too highly, and recommend it to all Orthodox families. At some point, we will all be faced with a funeral in our lives and this is an excellent book to explain Orthodox funeral traditions to our children.  The only caveat for UK readers is that formal Visitation services are not commonly held here, though many families do informally visit their reposed loved ones in the funeral home prior to the funeral.

There is a valuable accompanying Activity Workbook to this title, allowing children to write stories or poems about their feelings, information about grief as well as providing prayers for the departed, Bible verses about death and bereavement etc. Instructions on how to make Koliva are given, as well as suggestions for making a memory table and ideas for writing letters to be placed in the coffin of the departed relative. There are word searches, ideas for drawing pictures, suggestions about people who may be able to talk to you about how you feel and support you, and so much more. Details of organisations which can help support grieving children and families are also given. This workbook is an excellent resource and extension of the work of the initial book and is well worth purchasing.

Posted by Elizabeth @ The Garden Window at 3:56 pm