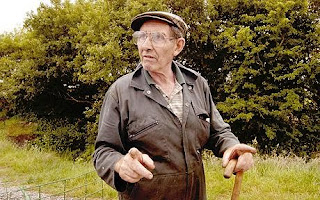 This man, Dic Jones, looks a quiet, unassuming, everyday Welsh farmer, concerned only with ekeing out a livelihood on his remote farm.

Wales is so very often "lumped" with England geographically, but their contemporary cultural lives are widely disparate both in quality and quantity. One thing the following article does not making explicitly clear is the fact that Dic's award-winning poetry was written in Welsh.

Dic Jones: face like an undertaker’s shovel, but the mind of Byron

He looked every inch the weather-beaten countryman, hunched over the small tractor, a flat cap rammed down on his gaunt features, ploughing the reluctant Cardiganshire earth into a keen westerly wind. Dic Jones was the archetypal Welsh farmer, spare of frame and sparse with words.

But he was much more than that. He was a poet, esteemed by his peers as one of Britain’s heavyweights of the past 50 years when he died weeks ago at the age of 75. His life and work also offers an insight into a fascinating and unknown world, just an hour away from England. For Welsh poetry is not just surviving, it is thriving and it’s fun.

Jones’s work is all but unknown beyond Wales, because understanding it means overcoming formidable obstacles. He wrote in Welsh, and he was a master of the strict metrical discipline of cynghanedd, with its complex rules for the internal rhythm and rhyme within each line, as well as within the verse.

Dic Jones left school at 15 to work on the family farm in west Wales. His main themes were the land and the seasons, though he was more than just a pastoral poet. Two years ago, he was appointed Archdruid, the ceremonial head of the country’s National Eisteddfod.

An English writer once described him as having a face like an undertaker’s shovel, but this dour countenance was misleading. He had an impish wit and one of his trademarks was the humorous limerick, composed on the spot on radio and in public contests that had hundreds convulsed in laughter.

The word poetry in England perhaps ranks only with the phrase “Arts Council” as the deadest phrase one can write in a newspaper nowadays. This is not so in Wales, where poetry is an art form practised and appraised in public forums. Its heroic status and its rules and disciplines are unchanged since the Middle Ages. There can’t be many other places in the world where a whole nation gathers every year to hail a poet as its champion. It sounds like a concept from classical Athens, but it happens every year at the Eisteddfod, where a literary champion is hailed with all the enthusiasm of a Cup Final crowd.

The clamour goes unnoticed in England of course, where the cultural spotlight is fixed on Edinburgh. Marvellous stuff, no doubt. But the Edinburgh International Festival is avowedly a huge importer of talent. Wales nurtures its own and has such an abundance that it exports the stuff.

So how did a farmer come to be writing poetry? Poetry in Wales is not a rarefied art. For those lucky few that have the knack it is a regular part of life. The art of poetry was handed down to Jones by the Cilie clan, a local family who were practised poets, honing their natural talent, passing it on.

There are complex rules so there is no room for slackness or pretence, offered by the “freedom” of modern English verse which produces so much dreadful bathos that passes for poetry. Then it needs practice… at the pub. An acquaintance recalls going to a bar in the far west where three friends had a three-hour conversation in cynghanedd. Then there is competition.

Jones recalls he was spurred to write by competing at “socials” run by the Young Farmers and the Urdd, a youth movement which has been a driving force behind Wales’s cultural revival. He won the Urdd poetry chair five times before winning the National. And no way is poetry the province of old men, youngsters are now setting the pace. Before he died, Jones mused modestly if he were competing for the chair today he would be in the third rank.

Finally, there is Ymryson y Beirdd, a poetry-writing contest that has run for more than 40 years. It is more popular than ever, thanks to presenter Gerallt Lloyd Owen, for me Wales’s greatest living poet. He chairs the show, encouraging with finely judged adjudication – a one-man national poetry coach. He says the standard of cynghanedd poetry is as high now as in its 15th-century heyday.

Posted by Elizabeth @ The Garden Window at 9:28 am

That's really great! I passed this along to a friend! Thanks so much for sharing this!