JUST READ Adopted By The Amish 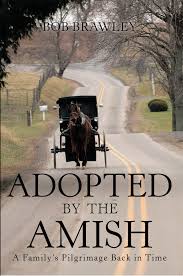 Adopted By The Amish:

A Family's Pilgrimage Back In Time


When I first started to read this book, I foolishly allowed myself to flip to the end and discovered that the family did not remain Amish. I was a bit disappointed and laid the book aside for a while, thinking it was not what I had hoped to be reading.

Yesterday I picked the book up again and just read it straight through, and what a good read it was!  Bob had a very chequered past despite his Christian upbringing, and a precipitate second marriage started well but he and Shelly soon developed problems. A chance newspaper article mentioning the Amish piqued their interest and they went to Missouri to visit the Amish community. They were made very welcome and after their return, they kept thinking about the family they had met. It was not long before they decided to sell up and move back to Missouri with the aim of becoming Amish, and this book tells of many of their experiences as they started to become familiar with the Ordnung of the strict Old Order Amish community the Bishop allowed them to live in.

Unfortunately, things did not work out as they had hoped and ill-health and  accidents saw them making the hard decision to leave the community and rejoin the English world again. That too was an equally hard transition and led to heartbreak before an eventual happy ending.

It is a really interesting read and gives insights not often found in other books. It still left many of my  questions unanswered, but is an enjoyable read.

Posted by Elizabeth @ The Garden Window at 8:36 pm