The Roman Quests1: Escape From Rome 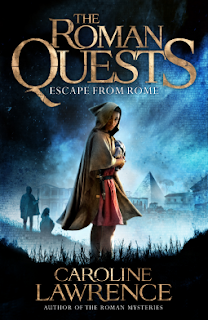 The Roman Quests 1: Escape From Rome

Published by Orion Children's Books, May 2016

If you liked Caroline Lawrence's wonderful "The Roman Mysteries" series, you certainly won't want to miss the start of this new series, set in the times of the evil Emperor Domitian. Domitian encouraged the  activities of delators, who denounced people they believed to have been undertaking activities treasonous to the Emperor. The accused's possessions, home and money would be confiscated and divided between the Emperor and the delator; the Emperor therefore gained easy money and delators had a convenient way to punish people who offended them and gain monetarily too.

When Juba's mother wakes him in the middle of the night to prepare him to flee with his siblings to their uncle, who lives in far-away Britannia, she ensures they have enough valuables to be able to pay their way, but nothing goes according to plan. Disaster follows disaster, and Juba has to make a  heartbreaking decision about his baby sister Dora in order to physically protect Fronto and Ursula, as well as keeping a dreadful secret from them.

Adventure follows adventure, and when they eventually arrive in cold and wet Britannia, they are older and wiser but find to their horror that their troubles are very far from over. With the help of unexpected and welcome allies, they have to face treachery, betrayal and danger once more. Have they escaped one dreadful fate only to fall into yet another?

This is a fast-paced, nail-biting adventure story  aimed at Key Stage 2 children aged between 7 and 11, though it would certainly be enjoyed by older readers too; I stayed up ridiculously late last night to finish this book because I simply could NOT bear to go to bed without finding out the ending :-)

I didn't simply "read" this story, I felt that I was actually there with Juba and his family. I found it absolutely spell-binding and chockablock with accurate historical detail, and I'm eagerly awaiting the next book in the series.

Posted by Elizabeth @ The Garden Window at 11:24 am