Seasons In My Garden 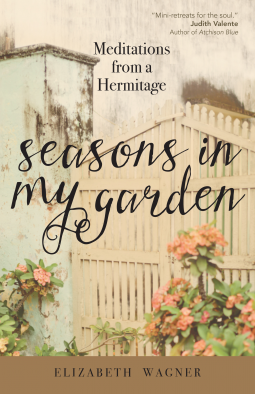 Seasons In My Garden
Meditations from a Hermit
By Sister Elizabeth Wagner
Ave Maria Press, March 2016

Elizabeth felt called to monasticism even before she was sure she believed in God; once she knew she believed, she tried out her vocation with the Carmelites before eventually settling in a semi-eremitical community in Maine which follows the Rule of St Benedict.

These are her meditations, starting with  the bitter chill of Winter, the joys of Christmas, snippets from the Breviary and the hazards of living  in an area with so many trees along the roads mingling seamlessly with descriptions of decorating the tiny Chapel and making fruit cakes. Each chapter can be read as a stand -alone meditation or you can simply follow her thoughts and descriptions of her life sequentially as presented; I tried both methods and thoroughly enjoyed both!

Sr Elizabeth is a keen observer both of the human condition and the religious life; the glories of God's creation which she sees all around her - especially in her beloved garden where she delights in growing herbs - are vividly described.  This is a deep, deep, book which bears careful reading, yet it is so joyously, beautifully written that it simply captivates and entrances the reader, feeding mind and soul alike with challenges, beauty and faith.

Posted by Elizabeth @ The Garden Window at 12:48 pm