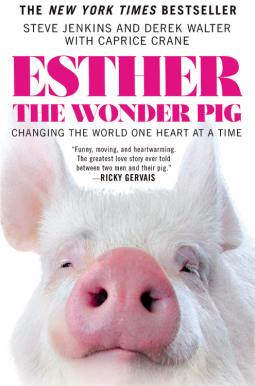 Changing the World One Heart at a Time


I first found out about Esther via a casual link on Facebook. Intrigued, I ended up visiting her page and soon  I was following her page every day, reading about her life on her farm with her Dads. There was absolutely no way I was going to pass up on reading this book and learning even more about Esther's story :-)

Esther was allegedly a mini-pig when Steve met her, fell in love with her and adopted her, but she proved that she most manifestly was not a mini-pig when she grew - and grew - and GREW, weighing in now at some 600 pounds.  Derek was initially an extremely unwilling partner in raising Esther,but soon grew to love her dearly as well. Raising a small piglet was enough of an issue, but as she grew and then outgrew their small suburban home, what on earth were they going to do? They could not bear to part with her, yet the challenges and stresses of raising a pig, however gorgeous and lovable she might be, should never, ever be underestimated. Even the simplest practicalities such as the vast amount she drinks inevitably needing to be excreted in due course made me gulp.  House-training Esther was a challenge!

Setting up a Facebook page for family and close friends to keep in touch with how Esther was doing seemed a logical step and Steve and Derek were shocked by how great an interest people were taking in their pig. Soon, Esther's page went viral, she appeared in newspaper articles and everything just snowballed. People could not get enough of reading about Esther's antics and soon it became obvious that this unusual family needed to move to somewhere where Esther could roam free but still be a house pig too. And not to mention that they were illegally keeping her as a pet, according to the zoning ordinances of their neighbourhood....

This is the story of how a snap decision changed lives, altered behaviours and changed people's minds. How could Steve and Derek continue to eat pork when they cared for a pig in their home? Could they continue to eat any meat at all? Should they eschew all animal based products completely, and how would they manage this?  They were faced with lots of ethical quandaries and no matter what they did, people would - and did - unfairly criticise their point of view.  They are at pains to show that Esther is funny, charming, shrewd, entertaining, clever and above all, lovable and that far too many factory farmed pigs just like her lead a truly horrific life, which should be a matter of ethical and moral concern to us all. There are a few F-bombs in the book, FYI.

Well worth reading, and highly enjoyable too. Long may Esther and her family flourish!

Posted by Elizabeth @ The Garden Window at 11:38 am

Oh gosh - this looks good, too! My Amazon wish list is populating from your recommendations! x