Lord of the World 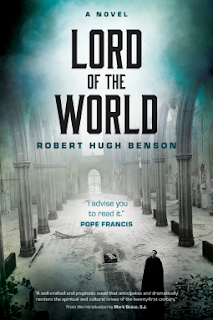 Lord of the World

This is a re-publication of a book which was originally written in 1907 and it is set in a dystopian future, close to our own chronological time.

Christianity has all but been abandoned in favour of a secular humanism which embraces euthanasia as a kindness to those suffering from severe injuries, mental or physical illness, or for those who simply wish to end their existence. Religious faith is barely tolerated and most Protestant denominations in England have gone the way of the  established church and adopted humanism  as the guiding star of belief and praxis. Only the Roman Catholic Church has held steadfast, although people and priests are leaving even that church in droves as faith becomes less and less socially acceptable amongst all classes of society.

The story was a little slow to start, but I quickly found that I simply had to keep reading. The age of the book is shown in its mention of the use of asbestos in construction and the use of airships (volors) for rapid transcontinental transportation, for instance. This did not detract from the story and the book generally has a remarkably contemporary feel, with the loss of sovereignty of nation states in favour of a European, then world, confederation of states, which ultimately becomes the fiefdom of the mysterious yet all-powerful and mesmerising Julian Felsenburgh,

Everyone dreams of world peace and when Felsenburgh  promises he can actually deliver this, he is hailed as a hero, the Saviour of the world, and the world rushes to pledge allegiance to him and his ideas, with horrifying results. Soon, he becomes one before whom all must bow, pledge allegiance and even worship, or face severe punishment.

One British priest, Fr Percy Franklin has held firm to his Christian beliefs, despite all the difficulties, dangers and trials which beset him, and it falls to him to be eventually elected Pope and to keep the tiny remnant of faithful Christians worldwide trusting in God as the world edges ever closer to the Apocalypse.....

Remarkably prescient and almost prophetic, I found it well worth reading. In this edition, there is an introduction by Mark Bosco, S.J. and a particularly interesting  "Theological Reflection" by Michael Murphy.  The story behind the author's conversion from Anglicanism to Roman Catholicism and why he wrote this book is covered by Martyn Sampson, so there is plenty of food for thought in these chapters as well as in the "Lord of the World" itself.

Posted by Elizabeth @ The Garden Window at 5:47 pm

I love this book... Depressing and scary but better than the left behind stuff.

I can't believe I had never heard of this book before; certainly the best Christian dystopian novel I have read.