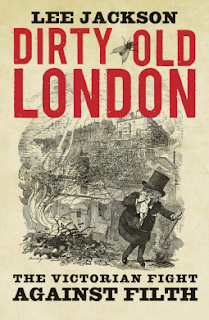 The Victorian Fight Against Filth


When a population increases rapidly, there will be a concomitant rise in waste of all types. Consider the  infamous night-soil (human refuse) collected at night in order to minimise the annoyance caused by odours, or the manure and urine liberally deposited by the horse drawn carriages and  hansom cabs, dirt of all sorts, household refuse, ash and cinders, soot from coal burning fires and factories, dead animals such as feral cats and dogs, and worst of all, dead human bodies.

All of the above had to be disposed of somehow; methods ranged from rough and ready to carefully thought-out, from simply dumping items in the street or the nearest body of water (especially the River Thames) to the construction of miles of sewers, public toilets and brand-new burial grounds and housing.

In nine riveting and mind-boggling chapters, Lee Jackson introduces us to the darker side of London and the people who tried, with varying levels of success, to clean it up.

Posted by Elizabeth @ The Garden Window at 12:51 pm