The Diary Of A Wimpy Kid: Latin Edition 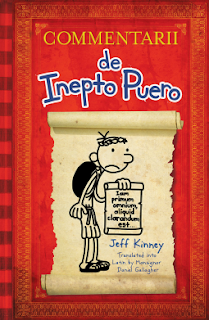 Translated by Monsignor Daniel B. Gallagher

The Diary of a Wimpy Kid series of books are immensely and perennially popular and yes, we have them all at our home! I was excited to see that someone has had the brainwave of producing a Latin edition of the first book so that Latin students can have something very contemporary to study, and hopefully enjoy themselves as they do so.

Although several of the Harry Potter stories have been translated into Latin, their full pages of dense text with no illustrations makes even flicking through one of them a daunting prospect for adult Latin students, let alone youngsters. With this book, the frequent - and very funny - cartoons not only add clarity to understanding the story, they break up the text into more easily digested and rather less intimidating chunks.

Having said that, it is not a book for absolute beginners; even after studying Latin at school for two years many moons ago, and belonging to a U3A Latin study group for the last three years, I still found myself needing to refer to either my Latin dictionary and/or my Grammar text for clarification, and was tempted to borrow my daughter's English text for help.

The Latin translation has been done by Monsignor Daniel B. Gallagher who is currently working at the Office of Latin Letters at the Vatican and the author has written an appreciative foreword to this Latin edition.

Posted by Elizabeth @ The Garden Window at 10:48 am