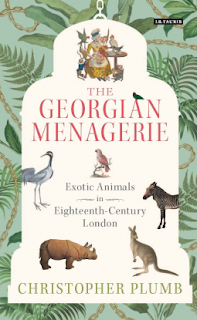 I have vague recollections of reading about a collection of exotic animals kept at the Tower of London in one of Miss Heyer's Regency novels,  (I believe it was Mr Chawleigh taking Lydia Deveril  to see them in "A Civil Contract") but I had absolutely no idea that  in reality, the Georgians took their interest in exotic animals to quite inordinate lengths.

Christopher Plumb has painstakingly collated references to exotica ranging from canaries to lions, rhinoceroses and just about everything in between, covering those owned by individuals and organisations, from a single animal or bird to zoological collections. He describes how they were kept as pets, or used for entertainment, food, medicinal resources, sport, science experiments and research.

Interest in these animals was widespread across all social classes; even the working classes could in time hope to afford a singing canary and as for the wealthy, well, wherever in the world English ships could sail, expeditions could be mounted to capture and import increasingly rare and unusual creatures. Highly collectable creatures were sought after and obtained by any means possible, both legal and illegal.

Sadly, many animals and birds did not survive for long, being fed, housed and treated in inappropriate places and ways, and it makes for sobering reading to think that not much has changed in the ways that humans still so often treat wildlife in the intervening years.  The undercurrent of sadness this book produced means that I cannot in all fairness categorise it as entirely enjoyable to read, but it certainly is a fascinating, informative and enlightening book indeed.

Posted by Elizabeth @ The Garden Window at 2:30 pm