The Complete Francis Of Assisi 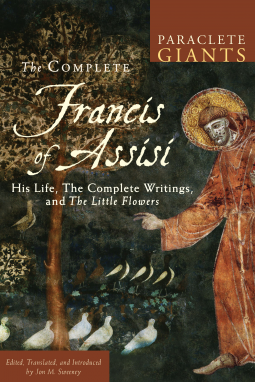 The Complete Francis of Assisi: His Life, The Complete Writings, and The Little Flowers
Edited, Translated, and Introduced by Jon M. Sweeney
Paraclete Press, August 2015


I vividly remember being enchanted by the stories of St Francis and his followers when I read "The Little Flowers of St Francis" by Brother Ugolino when I was in my early teens but I did not know of any modern biographies about Francis nor of any works written by him, or I would have read those too!

Book One contains the biography by the French Protestant minister Paul Sabatier, originally published in 1894 and edited and annotated by Jon Sweeney for the modern reader.
The biography actually ended up on the RC church's prohibited book list (the Index Librorum Prohibitorum) the same year it was published, but that did not stop the book being translated into many different languages and becoming a serious bestseller. It is relatively short but crammed full of interest - Sabatier sees Francis as an early forerunner of the Protestant reformers in his zeal for change, and his very real affection for Francis is tempered with a slight scepticism of some of the traditional stories about the Saint. Sweeney's annotations in the sidebars of the text are extremely interesting and helpful.

Book Two contains the essential writings of the Saint, prayers and canticles, monastic rules - including a rule for Third Order lay members -  and a number of letters including one to Brother Anthony of Padua, who became a canonised saint himself.

Book Three contains Sweeney's careful rendering into modern English of the text of  "The Little Flowers Of St Francis", along with an introduction and annotations. It has been re-ordered into a  chronological form and is immensely readable.

Jon Sweeney has produced a great resource by bringing all this together in one substantial volume, which will be of interest to a large audience. There is a good bibliography and suggestions for further reading, and the whole book has been carefully indexed with an excellent table of contents for each of the three parts. This is a superb book which will be eagerly read by all  who venerate St Francis of Assisi.

Posted by Elizabeth @ The Garden Window at 10:43 pm

Thank you for this - it looks most interesting.

Elizabeth Goudge wrote a very good life of St Francis. Out of print now, but there are old copies on Amazon.
http://www.amazon.co.uk/Saint-Francis-Assisi-Elizabeth-Goudge/dp/0340020849/ref=sr_1_2?ie=UTF8&qid=1438894092&sr=8-2&keywords=elizabeth+goudge+st+francis