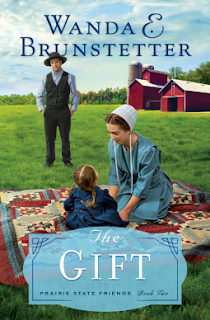 This is the second book in the "Prairie State Friends" series and this time, we learn more about Leah Mast and her talent for treating others using reflexology. Many sing her praises, but not her neighbour, Adam Beachy. He despises reflexology and takes every opportunity to belittle it and makes Leah feel uncomfortable as a result, especially as she cannot see why he should feel that way.
Leah decides it is best to have as little to do with Adam as possible, but their paths are forced to cross in a dramatic way when Adam's twin sister and her husband are killed in an accident, leaving Adam as the guardian to their three daughters.

Totally out of his depth - and comfort zone - in dealing with the children, who are shocked, traumatised and grieving for the loss of their parents, he ends up asking Leah to help care for the girls so he can continue to work in his hardware store. Seeing each other so often makes their initial attraction slowly develop into more romantic feelings, though neither will acknowledge or admit this openly. The girls become increasingly fond of Leah, and eventually Adam wonders if the best thing for them would be if he asked Leah to embark on a marriage of convenience with him.

When Leah meets a nurse who has just moved to the town and they start a tentative friendship, it turns out there are lots of skeletons in closets. Slowly, the reason for Adam's distaste for reflexology becomes apparent when Leah finds that the reason Adam's mother left her family and the Amish faith was to pursue a career in nursing after using reflexology in her community...

There are lots of twists and turns in the plot of this fast moving book, some of which I anticipated and others I certainly did not. The role of the hummingbirds is simply lovely, the information about banding the birds was fascinating indeed and both Adam and Leah share a great love of nature.  The Amish in this area are depicted as rather more progressive than in other stories, allowing the use of bicycles and we see much less use of  dialect. Leah's parents are often referred to as Mom and Dad as opposed to Mam and Datt, and her parents are very determined that Adam allow Leah to continue her reflexology work after she marries, despite Adam's initially vehement objections.

I found this an interesting read, but don't think it is as good as the first book in the series, "The Decision". It does not seem as neatly crafted as her other books, with quite a lot of repetition of phrases.

Posted by Elizabeth @ The Garden Window at 1:44 pm