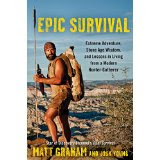 By Matt Graham and Josh Young

We have watched Matt Graham on the Discovery Channel survival show "Dual Survival", so I was delighted to be offered the chance to read and review this title as an e-book. His feats of endurance  are truly remarkable -  in only fifty eight days he ran the entire 1600 mile Pacific Crest Trail and has taken part - on foot!-  in  a three day horse race and finished third.

But what motivated this man to more or less leave the modern world behind in favour of living as close to nature - and as close as it is possible to live the lifestyle of ancient hunter-gatherers? Could anyone do it? What does Matt get from his unusual way of life?

A very real love of nature from childhood and a growing feeling that man is doing himself no favours by alienating himself from the natural world and living in a way that humans were not developed to cope with was the catalyst for changing his way of looking at the world. He made the decision not to drive a car for eight months and instead, he ran everywhere, building endurance and gaining a reputation for both speed and stamina in his running, as well as developing a remarkable way of "reading" the natural world around him in his work as a member of a Park Service search and rescue team. Gradually, he spent more and more time living a "wild" life, willingly learning from anyone who has skills to teach him and then seeking to pass these skills on to others.

The way Matt tells it, he feels that his alternative way of looking at the world which surrounds him is accessible to anyone who wants to live at peace and at one with nature. It is not really surprising that  his belief system changes from a basic and lacklustre exposure to Christianity to a form of spirituality more consistent with that of Native American Indians. As his whole lifestyle becomes more focused on living in harmony with Nature and being mindful of an animal needing to die in order to provide him with food, he learns to be wholly respectful of the animals he kills to sustain his own life and makes sure not to waste anything at all in honour of this sacrifice.

Matt does not feel lonely, but this is most likely not a way of life that would be sustainable to many people. Although I enjoyed the book and found it very interesting, I don't feel the urge to follow his example but will continue to admire his exploits and convictions.

Posted by Elizabeth @ The Garden Window at 7:06 pm