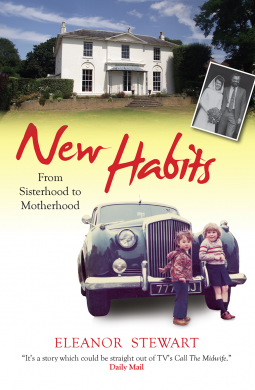 When Eleanor Stewart left her Catholic convent in order to pursue her desire to be a wife and mother, she was re-entering society as a young woman in 1969 - a society which was dramatically different from that which she had known when she entered the convent almost a decade earlier.

Her first few months were a steep learning curve as she had to adapt to different clothes, different customs and different ways of behaviour, not to mention the aftermath of her parent's separation and her mother's mental health problems.  From going to the cinema, ordering alcoholic drinks, buying clothes and being horrified at the cost of living, she documents everything about her new life, and does not shy away from describing the trials and tribulations of dating boyfriends after having been a nun.

Eleanor continued her career as a midwife, this time in Chichester instead of Liverpool where she had worked as a nun-midwife, and quickly made new friends and forged a new life for herself. She and a friend moved and found jobs in Dorset for a period, enduring a bitter cold winter and an equally chilly working environment in the local hospital before she finally moved and settled in Portsmouth, where she met and married John, a self-avowed atheist. Having the children she so earnestly hoped for  was not as easy as she had envisaged, but eventually she and John were to have their adoptive family after medical problems made it impossible for her to conceive again.

I did enjoy finding out what happened to Eleanor after she left the convent, but many of the mistakes she made in her relationships with men were obvious to those around her (and to the reader) and were to have ramifications later in her life. When the book ends, she has finished work to look after her young family, but I am sure that certainly is not going to be the end of Eleanor's story.

Posted by Elizabeth @ The Garden Window at 5:47 pm