When Books Went To War 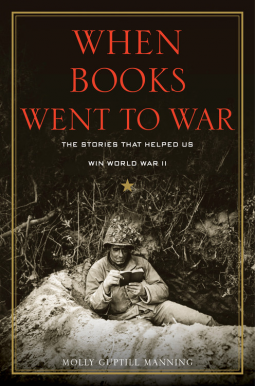 Ordinary German citizens were careful to make sure they had nothing in their homes which could make them open to criticism on this front, and during the Second World War, 100 million books were destroyed in Germany. The destruction of proscribed books was shortly followed by the imprisonment and destruction of people whom were deemed a threat to Nazi Germany and its desire to rule Europe.

The need for books to accompany American troops as they journeyed to and travelled within Europe, to lift their spirits, boost morale and occupy their time, was quickly recognised. This remarkable book outlines the story of how the Government, librarians, publishers and authors worked together to make this a reality. Raymond L. Trautman, a reserve soldier who had a library degree, experience of running bookstores and knew how the book industry operated, and Althea Warren, who was allowed leave of absence from her post at Los Angeles Public Library, were the initial key players. Supported by the Red Cross and wholeheartedly backed by the general public, America's largest book drive was soon underway, collecting new books and second-hand books for the troops.

The importance of the printed word in sustaining troops was recognised and the American Government agreed to authorise the printing of both books and magazines out of the war effort budget. Publishing companies found that it was too expensive and difficult to produce so many quality hardback books, due to a shortage of raw materials, and the birth of the mass market paperback edition was born.

A huge variety of fiction (both classic and modern) and non-fiction to suit all tastes and reading abilities was commissioned and many authors were delighted to be told their books had been chosen to be re-published in this special edition for the troops. Feedback from the troops about which titles they particularly enjoyed or found helpful was disseminated back to the authors, many of whom  took pains to answer each and every letter they received. Reading the accounts of how much these books meant to the front-line armed forces is both heart-warming and heart-breaking in equal measure, and when you consider that 120 million new books were printed for the troops, it was a remarkable and highly successful undertaking, yet so few people are aware it even happened.

With the 1944 Soldier Voting Bill, known as Title V on the statute books, accusations of political propaganda and potential censorship as well as the morality of some titles became a strongly contentious issue, and eventually it was deemed better to avoid publishing a title at all rather than censoring and expurgating it for publication and affecting the ideal of free speech and freedom of the press. It is fascinating to see the lists of titles which were printed in Appendix B, and I now have an additional list of books I hope to read in the near future.

This was an amazing read, and a superb addition to my bookshelf.

Posted by Elizabeth @ The Garden Window at 7:09 pm

wow, that's really neat! it's wonderful to hear how books and librarians have made such a difference in other's lives!

What a truly amazing story!