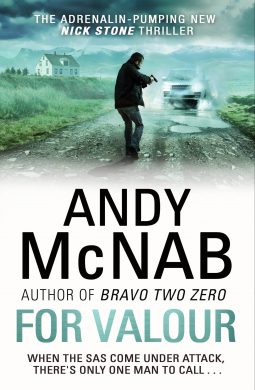 
It's surprisingly hard to say too much about this book without giving away the ending, so I apologise for the relatively short review :-)

The  Killing House, or to give it its proper title, the Close Quarter Battle Room, is where troops are trained in combat situations  involving hostage rescue, and always using live ammunition.  In theory it is an exceptionally dangerous place, but accidents are rare and fatalities even rarer. When Sam, the son of a deceased friend of Nick Stone's is accused and held on suspicion of causing a death in the CQB, his friends and colleagues are stunned and disbelieving,

When Nick starts to look into what happened, he finds that nothing is as straightforward as it seems on the surface and one by one, people who have been close to Sam - or investigating what happened - are being targeted and killed. Now that he has a baby son of his own, finding out what happened in the CQB and making sure that justice is done becomes even more imperative to Nick and he ends up travelling across Britain and Europe to try to find Sam's girlfriend Ella in a frantic race against time before the killers find her too.

Determined to uncover the truth, Nick finds that one of the very few people he really can trust in this situation just happens to be a priest. Nick is forced to confront some terrifying situations in which his own life is in very serious danger as he gradually uncovers a secret which someone will go to almost any lengths to keep well-hidden.....

Hard-hitting, gritty, frightening and entirely plausible, I was thoroughly gripped by the story and quite literally could not bear to put it down. It looks at what makes the difference between dangerous recklessness and real heroism and gives a remarkable insight into the emotional trauma soldiers can face when dealing with extreme situations in battle conditions, showing just how long a shadow such events can cast.

I really did enjoy this book immensely, as I discovered more and more about what really makes Nick Stone tick and just how far he will go to protect his family and friends. I've read all the Nick Stone books and enjoyed every one of them, but this, the 16th in the series, is outstanding.

Posted by Elizabeth @ The Garden Window at 8:35 am