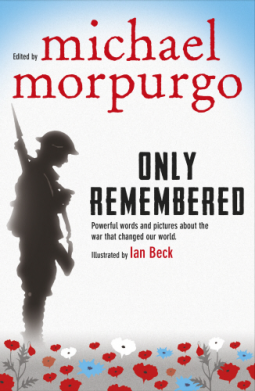 
****Updated to add that I have only just discovered that I received an abridged digital copy to review, and that the published book is much more substantial indeed ****

This is a very special hardcover book to mark the centenary of the onset of The Great War, aimed  at children but appealing to all ages.

The entries have been  chosen by politicians, activists, writers and actors, and cover a wide variety of topics, beautifully and lavishly illustrated.

Some of the classic poems make their appearance, including the almost obligatory but still superb "Anthem for Doomed Youth" and "Dulce et Decorum Est" by Wilfred Owens, but we also see a war comic, period songs and family stories as well as the real life gripping tale of the heroism of Albert Ball, RAF flying ace.

The commemorative scroll which was sent to the families of the fallen was written by Rudyard Kipling, who was to lose his own son in the conflict, and we have the opportunity to read the original script for part of the final episode of "Blackadder Goes Forth", written by Richard Curtis and Ben Elton.

For me, the highlight was a piece of unutterably poignant prose by Noel Streatfeild in her autobiography, A Vicarage Family, detailing how her family learn of the war life and the untimely death of her cousin John, but the whole book is a worthwhile and absorbing look at what was believed to be the war to end all wars.

Posted by Elizabeth @ The Garden Window at 3:02 pm