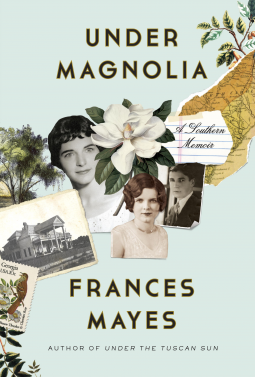 Under Magnolia: A Southern Memoir

I credit Frances Mayes' wonderful book "Under The Tuscan Sun" with making me fall in love with Italy as it described Villa Bramasole, the Italian house she and her husband rescued and renovated.  In that book she regularly mentions snippets about her life growing up as a Southern girl; "Under Magnolia" is the fuller story of growing up in Georgia.


Fitzgerald, South Georgia, was a place where there was a  racial segregation and this coloured her early life; one of her staunchest allies in an often unhappy family was Willie Bell, who worked for her parents and cared for her. Her parents had a volatile relationship with each other and with Frances, who could be hit with a switch till she bled. Her father was shot, taking a bullet that was meant for her grandfather by a disgruntled employee, and this affected him profoundly, fuelling his subsequent outburst of anger; Frances vividly describes having to go to the same school as the executed shooter's daughter in their small community.

Her father died comparatively young, after a long illness which cast a shadow on their family both at the time and afterwards; her feisty mother was most profoundly affected even though his death had been expected for a long time, and Frances' relationship with her changes quite dramatically as she becomes more and more independent of her mother. As her mother drowns her sorrows and financial worries in drink and searches for another husband, Frances devours books and music in equal measure as she finishes high school and looks forward to college days, where she eventually elopes and sets up life as a married woman.

She describes a completely different world from that of her adult academic career and her other home in Italy, that's for sure. From Southern names, food, clothes, the language, houses, the weather - everything is different, foreign, exotic even to this UK woman, and now I have a hankering to visit the South too....

Posted by Elizabeth @ The Garden Window at 12:23 pm