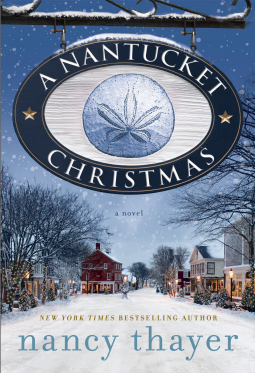 It's the end of November and time to start reviewing Christmas themed books in earnest!


Nicole, a recently retired nurse, lives on the wonderful island of Nantucket with her new husband Sebastian. They are blissfully happy and it looks as if nothing could spoil their first Christmas together as a married couple......until Sebastian's adult daughter Kennedy and her family end up spending the whole Christmas week at their house, the same house in which Kennedy grew up.

Kennedy is now married, with a toddler son and another baby on the way, but she is childish,  manipulative and determined and will stop at nothing to try to get her father to re-unite with her mother - even though her mother is in a serious relationship and her father has remarried.

Maddox is a delightful little boy but his mother is struggling to be as perfect as her beautiful and self-obsessed mother Katya, and obviously finding adapting to motherhood to be an overwhelming process. At times I sorely wanted to shake Kennedy and thought that Nicole behaved with admirable self-restraint to her step-daughter, who plots and schemes relentlessly.

It looks as if the whole week is going to be a catastrophe, especially when there is an unexpected  visitor in the form of  Kennedy's mother Katya.  Young Maddox  manages to find a stray dog and get caught up in an adventure of his very own which throws the whole family into turmoil...

The descriptions of Nantucket and its Christmas festivities are both detailed and wonderful, and I thoroughly enjoyed every page of this novella. It has definitely put me in the Christmas spirit!

Posted by Elizabeth @ The Garden Window at 1:58 pm