The Why Of Things 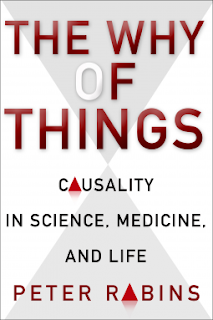 The Why of Things:

Causality in Science, Medicine, and Life

Wow. Quite simply, wow.
This is one of the most complex, mind-boggling and ultimately satisfying books I have read in a very long time. All of us have sometimes wondered "Why has this happened now?" when serious problems have arisen on a personal, medical, national or global scale; this is a question which has resounded throughout recorded history and engaged the minds of the most able and articulate philosophers throughout the ages.

Rabins, an eminent psychiatrist, takes us on a succinct yet clear whistle-stop tour of philosophical musings, some famous, some less well-known: from the ancient Greeks (Democritus, Plato, Aristotle) through Scholastic thought in the Middle Ages (Aquinas) to the modern scientific age beginning with Bacon, Galileo, J.S. Mills, and moving on to Descartes and Hume, Vico, Kant and Popper who observed flaws in the previous "scientific" method and proposed further refinements to the idea of causality.

Reassessments of current theories were made with the increase of medical knowledge by way of Sydenham, Virchow, Pasteur and Koch. Later again, Weber and Jaspers identified two specific types of causal logic and Weber's concept of needing different types of reasoning to solve different sorts of causal questionings is explored in depth in the latter chapters.

I cannot think of any other book I have read which encompasses Einstein's Theory of Relativity, Heisenberg's Uncertainty Principle, Godel's Incompleteness Theorem, Chaos Theory , Systems Biology , Networks (including the World Wide Web), empirical causality in the physical and biological sciences, historical and modern epidemics, gene/environment interaction in modern medicine, epidemiology, the benefits and pitfalls of randomised controlled trials in medical care, narrative truth in historiography, current opinion, inventions and modern sociology, Chernobyl, the collapse of the World Trade Center buildings on 9/11 and the Fukushima nuclear reactor disaster which are some of the events discussed and analysed using a variety of models of causality. A later chapter deals specifically with how religions look at causality and this was of particular interest to me and will repay intensive study.

As far as I was concerned, this was a book which is best being read in small chunks, pondered over and the contents thoroughly digested before moving on to the next chapter, but it was a profoundly revelatory read for me and one which I found truly fascinating.

Posted by Elizabeth @ The Garden Window at 7:32 pm