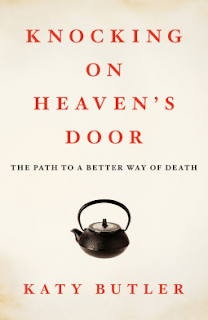 Knocking On Heaven's Door:
The Path To A Better Way Of Death

To be published by Scribner,
10th September 2013

Given the opportunity to choose  where and how you would prefer to die, what would you opt for ?

Katy Butler's father had a stroke. He made a reasonable recovery, but then needed a hernia repair operation, which the surgeon wanted to do under general anaesthetic but only after her father had a cardiac pacemaker fitted to control a slightly unstable heart rhythm. That decision was a slippery slope to a cascade of medical involvement which resulted in a situation where several years later, even though her father became profoundly handicapped by the ravages of  severe dementia, every time his body tried to fail, his heart would be automatically shocked back into normal beat pattern.

Katy and her elderly mother questioned the wisdom of the initial decision to insert the pacemaker, and this book chronicles the story of how their lives changed as a result  and their subsequent attempts to get a doctor to disable the pacemaker to allow her father to die peacefully when his body failed him rather than the pacemaker keeping him alive.

She questions how society and the medical profession have  have been so overtaken by the truly remarkable advances of modern medicine that they are reluctant to allow any patient to die, even though it is very obviously not in the patient's best interests to keep performing invasive, painful and unpleasant interventions when there is no hope of reversing  or even stabilising the underlying terminal health problems. The effect that this has on those who have to care - often over a long period of time - for the affected patients is described with brutally truthful, honest and disturbing clarity.

It makes for profoundly uncomfortable reading and is a call to action to provide a more humane way of delivering  more appropriate and  responsive end of life care specifically tailored to the individual needs of vulnerable elderly members of society.

A challenging read, but a worthwhile read.

Posted by Elizabeth @ The Garden Window at 6:09 pm

Lord have mercy! what a difficult thing!

(always enjoy reading what you are reading, btw and your comments on my blog have been so uplifting to me, Thank You!!)