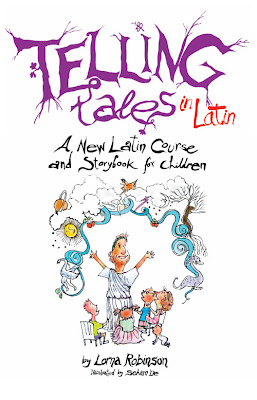 
I have been eagerly awaiting the publication of this new Latin course designed for children, and I was not disappointed. I study Latin at the local U3A and have collected a  wide variety of old and new textbooks; some are aimed at adults, some at children and all of the books so far have both redeeming features and failings. I live in perpetual search of the perfect Latin textbook, and this book is very close indeed!

I personally found the delightful colour illustrations, text layout and use of Ovid as narrator and guide to be refreshing and highly attractive, but I wanted to really put it to the "child test", so with the kind co-operation of a local primary school, I was allowed to work with a group of Year 5 children to see what they thought of it.

The book is pitched at the OCR Entry-level  Latin qualification, so I would be using it with a significantly younger set of children than the pre-GCSE children it is actually aimed at. To make it even more testing, it was a very mixed ability group and their comments were fascinating. They all liked the small format size of the book, which was not too intimidating for them. Everyone really liked the illustrations by Soham De which appear on every double page spread , the chatty, conversational style of Ovid's commentary and the use of speech bubbles. The paper  itself is sturdy and will stand up to heavy classroom use and frequent page-flipping.

These nine and ten year olds were delighted that even in the very first chapter, they were able to recognise and translate lots of the Latin words without needing to turn to the word list, which inspired them to ponder the other words to see if they could tease out their meanings. They were a little perturbed by the omission of "unda/undam" from the chapter word list and from the main vocabulary list at the back, but they liked the suggested activities and there was something to engage every child, no matter what their individual learning styles might be.

Every child was able to participate and contribute something to the discussion, and they felt this was a very accessible text for them as a Year 5 group. This would be an excellent choice of text to teach children aged 9 and upwards the rudiments of Latin, and as the book has all the vocabulary needed for the OCR exam, it is a very versatile text indeed. It moves smoothly and fairly quickly to quite complex sentences involving perfect and imperfect tenses and the first three declensions of nouns, covering a lot of Latin in its 101 pages.

Congratulations to all concerned in its production!

Posted by Elizabeth @ The Garden Window at 10:59 am