A Revelation In Autumn 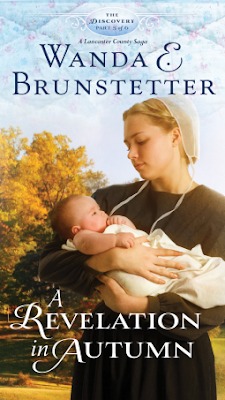 A Revelation In Autumn

Part 5 of The Discovery saga


Meredith and Luke's infant makes a dramatic entrance to the world at the beginning of this book, and the story races along inasmuch as an Amish-themed book can do.

Meredith is getting used to life as a widowed mother and continues to worry bout her meagre finances, whilst her old friend Jonah is falling deeper in love with her everyday.  Meredith's mother-in-law is fiercely protective of her and her new grandchild and really takes a dislike to the kind and helpful Jonah, doing everything in her power to dissuade the embryonic romantic relationship she sees between Jonah and Meredith. Merry's sister Laurie has made the decision to marry her Mennonite boyfriend and will not be joining the Amish church, causing a degree of sadness within the family.

In the meantime, the amnesic Eddie is settling in well with Susan and Anne's kindly grandparents and is doing his best to be helpful to the older couple.On one of his days off, he goes to see a hot air balloon display, and in a twist of fate, he and Meredith end up in the same place at the same time, though neither gets to see the other clearly - they are so near, yet still so far from each other!

Just as Eddie  is starting to remember a few things about his former life, Merry is making the decision to allow Jonah to court her......will Eddie regain his memory about his identity and his marriage, or will it be too late for the young couple to be reunited?
Share with friends using the share button below.

Posted by Elizabeth @ The Garden Window at 5:35 pm