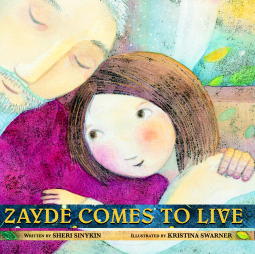 
There are not many books dealing with imminent bereavement for young children, and although this one is written primarily from a Jewish perspective, it respectfully emphasises that there are many different religious beliefs about souls and life after death, which would make it a useful book to many people.

In this story, we meet a young girl named Rachel, whose beloved Zayde (grandfather) has come to live in her home because he is dying. Nobody initially explicitly tells her he is dying, but she is a perceptive child and quickly works it out from what family, friends and her Rabbi do not say and from her own observations of how Zayde has changed physically . He is chair-bound, reliant on oxygen and can no longer run or walk with her. Instead, their activities are limited to what Zayde can manage to do; playing cards, watching TV or what is going on outside the window, and Rachel realises that she can now do things for Zayde instead.

Her friends tell her their Christian and Muslim beliefs about the afterlife, but she realises that because her family is Jewish, these will not apply to Zayde and she wonders and worries what will happen to him when he dies and eventually asks Rabbi Lev who explains their religious beliefs.

Rachel’s relationship with her Zayde does not simply change, it deepens and she carefully stores up many memories and conversations she has with him; he assures her he is not afraid to die and that dying is a natural and inevitable part of life.

The illustrations perfectly complement the thoughtful and simple yet profound story, and it is a sweet and loving book which could act as a good starting point for a Christian family facing the death of a loved one and wanting to broach the subject with a young child.
Share with friends using the share button below.

Posted by Elizabeth @ The Garden Window at 11:43 am