Book Review - A History Of Food In 100 Recipes 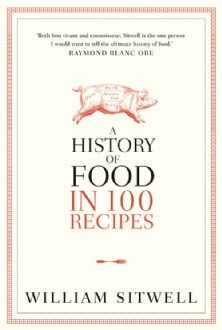 A History of Food In 100 Recipes
By William Sitwell
Published by HarperCollins UK, April 2012


There is indeed nothing new under the sun when it comes to people loving food and being passionate about its quality and preparation, as William Sitwell points out in his new book,  A History of Food In 100 Recipes.

Having acquired a small but select collection of historical cookbooks at an auction, he sets out to chart the history of food in 100 groundbreaking recipes from the earliest periods of history right up the present day.

Starting with an ancient Egyptian bread recipe from a tomb in  Luxor, whose walls also depict many other items of food preparation,  he muses  on how someone actually discovered how to make something as complex as bread from such unprepossessing raw ingredients. A Babylonian meat and vegetable stew follows, and we are treated to the earliest sweetmeats from the OT Biblical period, then rather more recipes from Greek and Roman times when written records were both more common and better preserved and quoted - the honeyed cheesecake seems surprisingly contemporary.

Recipes and discussions about Chinese rice, Viking fish, pasta and the increasingly more complex and exotic dishes which make their appearance in the Middle Ages across Europe follow in quick succession. Many of the foods are traditionally British - roast beef, Yorkshire pudding, marmalade and jam roly-poly, for instance, but recipes are drawn from across the world and all time periods.

Much information about cooks and food trends is provided in neat and easily digested chunks, and there are photographs and delightful period illustrations throughout. I was particularly interested to discover that Eliza Acton revolutionized cookery books by carefully placing a list of ingredients at the beginning of each recipe, rather than leave the poor cook to work methodically throughout the recipe before finding they have run out of something crucial when it is too late!

Things we imagine to be very modern innovations prove not to be so; 1860 saw the publication of the first book of vegetarian cookery by John Smith, and the first food promotional recipe may well have been Oxo's recipe for onion butter sauce at the 1908 Olympic Games. As technological innovations occurred, recipe books for those fortunate enough to have a refrigerator or a gas/electric  cooker were produced. These were closely followed by the start of UK wartime radio and publishing to help those having to cope with food  rationing during World War II.

After wartime rationing came plentiful food; perhaps too plentiful as those watching their weight began to look for books of recipes to help them. As a complete contrast, Gourmet magazines and books were also becoming popular, and cooks began to turn their attention to the broader horizons popularized by cookery writers such as Elizabeth David and Julia Child who both travelled widely and  made a determined  effort to bring the cuisines of other countries to people's attention.

This is a fascinating and unusual book which can be read straight through or simply dipped into for information, and  will be thoroughly enjoyed which ever way the reader chooses to use it. I can think of several people for whom I will be buying copies as Christmas gifts this year........

Posted by Elizabeth @ The Garden Window at 5:03 pm