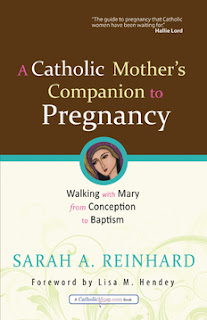 A Catholic Mother's Companion to Pregnancy - Walking with Mary from Conception to Baptism
By Sarah A. Reinhard


We are all used to the typical pregnancy manuals, which tell you about what physical changes to expect and how your unborn baby is developing at each stage in the pregnancy, week by week.  These books are indeed good, but the emotional/spiritual side of pregnancy, with its delights, joys and fears is more often than not given very short shrift indeed.

This excellent book fills the gap brilliantly, covering both the physical changes in mother and baby as well as giving the reader much food for thought and reflection on all aspects of the spiritual side of pregnancy, birth and afterwards.

Based on the mysteries of  the Rosary of the Blessed Virgin Mary,  and therefore aimed primarily at a Roman Catholic audience, it is also eminently suitable for  those of a high church Anglican/Episcopalian background. Some things are likely to be unfamilar to those outside the RC Church, such as Purgatory the chaplet of Divine Mercy, the Litany of the Sacred Heart and the Via Matris devotions.
Reading it from an Eastern Orthodox point of view, I found much of beauty and value for Orthodox Christians too, especially those following the Western Rite who may well be more familiar with the imagery of the Rosary.

The author has a great love for the Mother of God, often addressing her affectionally and informally as Mama Mary. Chapters are based on the weeks of pregnancy, outlining what is happening with mother and baby, possible events such as ultrasounds and hospital appointments, followed by devotional reflections about how Mary might have felt at various points in the mysteries included in the Rosary devotion. Scripture is cited and a brief prayer relating to pregnancy rounds off each chapter. It is a simple but effective format.

There are also "hard" things that may need to be dealt with, and the author and guest writers do not shy away from these less than happy aspects of pregnancy. Miscarriage, eating disorders and depression in pregnancy, the diagnosis of major congenital abnormality in the baby,  stillbirth and those cases when labour does not go as expected or planned are all discussed.  Extensive suggestions for  spiritual preparation for labour as well as the physical aspects are given, as are  ideas for adapting to life with a new baby and the important task of preparing for the baby's baptism .


The only thing which did make me pause for thought was the mention of the author picturing the Holy Spirit as a spouse rather than the more traditional imagery of a dove or flame, which did strike a slightly discordant note to me as I am far more used to reading Christ described as a Bridegroom rather than the Holy Spirit, but it was obviously of value to the author in appreciating the work of the Paraclete.


I so wish that this book had been available when I was pregnant with my daughters as I would have greatly enjoyed using it !
Share with friends using the share button below.

Posted by Elizabeth @ The Garden Window at 12:00 pm