Book Review - Legacy A Genetic History Of The Jewish People 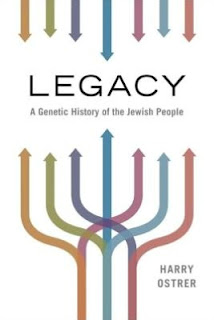 This a remarkable book, both for the subject and the amount of controversy the publication of the original subject matter generated.
The author is a medical geneticist who spent a great deal of time researching  the medical susceptabilities and strengths of Jewish people as they spread across the globe, and the publication of his work into the Jewish Hapmap Genome generated controversy and concern even though it was primarily an attempt to explain and document in genetic terms the spread of Jewish people across the globe long after the original Diaspora. This book was written in to dispel some of the concerns raised, to outline the genetics of the Jewish people and to discuss whether Jews  "constituted a race, a people, or a genetic isolate."

The book is divided into  six chapters, covering the topics of Looking Jewish, Founders, Genealogies, Tribes, Traits and Identity.

In  Chapter One, for example, he discusses what consitutes a stereotypical Jewish facial appearance and how accurate the perceptions are in reality, with special reference to  the work of Jewish scientists such as Maurice Fishberg, a keen physiognomist who himself had emigrated from Russia to America. The work of one or more Jewish scientists and thinkers is showcased in each chapter, and I was woefully unfamiliar with any of them before reading this book.

I was particularly interested in the epidemiology of diseases which showed distinct variations between Jews and Christians across the world, raising questions as to how much the variations can be described as purely genetic or lifestyle or an admixture of both factors. The increased incidence of Tay-Sachs disease amongst Askkenazi Jews is generally well-known, but Dr Ostrer draws in many medical conditions such as Thalassaemia, Gaucher disease and Phenylketonuria to name but a very few, which the general reader may not initially think have any specific point of reference to Jews but which occur in greater numbers in Jews of particular geographic communities. The genetics of mental illness, discussed in detail in "Traits" made for truly heartbreaking reading, so "Caveat Lector".

How genetics works - both in theory and in practice - and the scientific bases for a variety of medical conditions are very clearly and succinctly explained for the lay reader, and this book is highly accessible to the general reader as well as being detailed enough to hold the interest of readers who may have a more extensive background knowledge of genetics and medicine. That in itself is a considerable achievement !

This book is by no means simply about science and medicine, however; history, literature, linguistics, intermarriage, adherence to religious customs, historic living and working conditions and the role of  social cohesion are all discussed in depth with special reference to the Jewish people.

Interestingly, the US census return forms regard Jewish purely as a descriptor of religious adherence, not a racial identificator. It will be worth watching to see if this will change in due course, as the genetic research work of Dr Ostrer and others is adding increasing weight to the scientifc basis for Jews to be regarded as a biological race and not just a group who happen to profess the same religious faith.

I found the book to be an absorbing and enjoyable read and it has certainly inspired me to continue to read about this topic.

Posted by Elizabeth @ The Garden Window at 1:06 pm