Due to the Western Easter Public holidays, there was a delay in getting Mum's funeral organised.  At one point the organisation was the stuff of which nightmares are made, and will most likely make an appearance as a black vignette in this year's NaNoWriMo, so eventful was it..............

However, the funeral itself , on Thursday last week, was as lovely as a service held in a crematorium - my mother's express wishes - ever could be, and we were wonderfully supported and surrounded by many family and friends.

In our village we have a wonderful florist named Kath, and I thought you might like to see the flowers she made to go on my Mum's casket..... 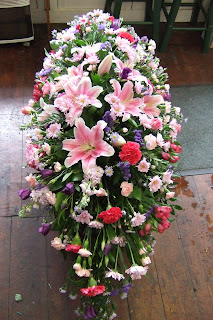 These three photos were taken in the florist's shop the day before the funeral.

Kath made a five foot long double-ended spray in shades of pink and purple, with magnificent star-gazer lilies and also stock for added scent. 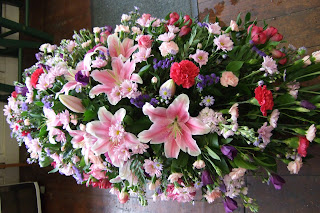 A close-up view showing many lily buds getting ready to open so the flowers would look lovely for as long as possible...... 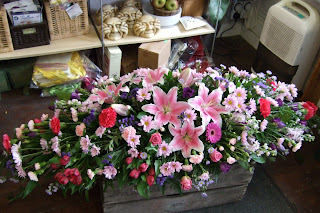 And a more distant view which shows the small
flowers at the base better. 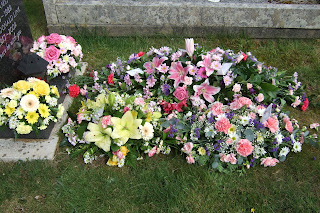 The day after the service, we drove to the crematorium to pick up Mum's flowers and we took them to the cemetery where my father and brother are laid to rest, and where Mum's ashes will be interred in due course.
The grave was a mass of colourful and beautifully scented flowers, and a fresh candle was lit in the grave lantern.

Posted by Elizabeth @ The Garden Window at 9:53 am

Memory Eternal. I'm sorry the organization part of it was such a hassle.

May her memory be eternal!

The flowers are stunningly beautiful, and thanks be to God for all the support you were given. My continued love and prayers.

Such very beautiful flowers a wonderful choice for your dear Mother.

That is such a beautiful array of flowers.
Hugs and prayers continue, my dear. Love to you. Memory Eternal.