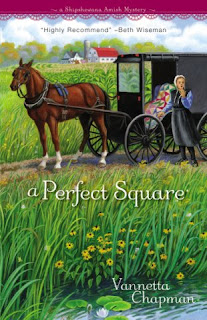 by Vannetta Chapman
Published by Zondervan, 2012

This is the sequel to Falling To Pieces, and I would definitely advise that you read the first book before tackling this one. I didn't, and it did take me some little while to get to grips with the characters and their past histories :-)

The story opens with the eagerly anticipated wedding of Tobias and Esther in their Amish community becoming entwined with the death of a young woman found in the pond on the land of Tobias' brother Reuben.
Esther's dear friend Deborah joins forces yet again with her English friend Callie to try to discover just why Reuben is refusing to say anything about the girl's death - is he implicated in her murder or totally innocent ? Why won't he speak to defend himself ?

Ghosts from the past also re-emerge for an elderly man who requests Callie's help in a seemingly impossible quest, and Callie finds herself being drawn ever deeper into the life and friendships she has made in Shipshewana after she inherited Daisy's Quilt Shop.

Posted by Elizabeth @ The Garden Window at 7:04 am

Thank you for the review, Elizabeth. I'm glad you enjoyed A Perfect Square. Now that you've read book 2, I hope you'll go back and pick up book 1--Falling to Pieces. I agree they are easier to understand in order, though it's not necessary. Have a wonderful week and thanks for reading.