The Band that Played On 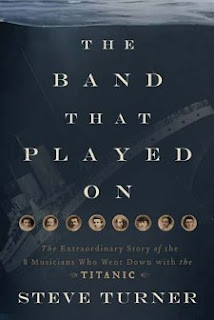 Like so many other people, I have always been fascinated by the tragic and doomed first voyage of the magnificent Titanic. So much has been written about the survivors, the conditions on board the ship and the amazing rediscovery of the wreck at the bottom of the Atlantic. Then came James Cameron's epic film, with the evocative scene of the band, heroically playing to try to keep the passengers and crew calm , before the ship finally sank with such dreadful loss of life.

But are any of these names familiar ?

These were the band members who provided music on board the ship throughout the voyage.

They came from a variety of backgrounds and educations; two were French, but all were united in their love of music and a certain longing for travel, excitement and adventure.

For the first time, the story of these men, their lives, families, work and music has been told. This truly fascinating and thoroughly enjoyable book tells us about these men, and how their loved ones reacted to the news of their deaths, and what happened afterwards.

BookSneeze provided me with a complimentary copy of this book.
Share with friends using the share button below.

Posted by Elizabeth @ The Garden Window at 12:10 pm